Design research studio Chmara.Rosinke has created a series of freestanding kitchens that respond to the themes of "ergonomics, ecology and delight" to suggest new ways of preparing and consuming food.

Berlin- and Vienna-based Chmara.Rosinke presented four design concepts in a Milan design week show titled The Kitchen for Cooking, which was exhibited as part of the Alcova exhibition.

Freed from the constraints of a typical fitted kitchen, the designs combined familiar kitchen elements in surprising ways, often with unusual shapes and playful approaches to storage.

"The objects shown here do not claim to provide a universal answer to the question of the kitchen of today," said studio founders Ania Rosinke and Maciej Chmara.

"Rather they are materialised trains of thought or spatial sketches that playfully deal with the subject of the kitchen and strive to free this sensual and emotionally charged subject from its rigid framework of norms and classical ideas."

Rosinke and Chmara have spent over a decade investigating the history of the kitchen and how it has changed in response to social and cultural shifts, as well as design trends. As designers, they use this research as a tool to explore what the kitchen of the future will be.

"Cooking is more than just food preparation," they said. "From culture to culture, the act of cooking varies greatly and differs from the image that is in our heads. It is a multi-sensory activity that can play a whole new role in our world that is increasingly taking place in the digital space."

Their latest design, NPK01, makes its debut at Alcova.

Made from stainless steel and plywood, its form was developed with consideration to how energy efficiency and recovery can be optimised in the kitchen, and how cooking habits have changed since the pandemic.

The design includes an irregularly shaped counter, an overhead bar for hanging utensils, storage space for home fermenting and an oven on wheels.

"This project asks how today's kitchens should be designed in terms of function, ergonomics, technology and aesthetics," said Rosinke and Chmara.

"The kitchen shown here is part of a larger-scale research project and challenges existing norms, in terms of heights, depths, workflows and space required."

The OFIS Kitchen, created in 2020, alludes to how the kitchen became a workplace for many during the pandemic.

The design strips the kitchen down to fundamental elements. It consists of an island on castors, with a sink at one end, a hob at the other, and a vertical element for hanging items.

The name OFIS is an acronym of "office for important stuff" and covers a collection that also includes an office chair, desk, lamp and a chaise longue.

A highly minimal appearance characterises the Werkraum Kitchen, which was developed as a representation of regional crafts from Austria's Bregenzerwald region.

Created during an artists residency in 2019, the design was built by local craft makers using ash and maple woods.

The most colourful design is the Neo Modernist Kitchen, created in 2018, which is designed for an individual who lives alone and cooks very rarely, if at all.

The deliberately lightweight design takes its cues from modernist colours and geometries, providing a suitable amount of room for preparing small meals and making coffee. 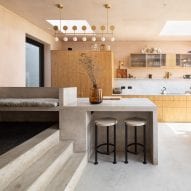 The Dezeen guide to kitchen layouts including peninsula, island and galley styles

The exhibition was presented on an outdoor terrace surrounded by trees, which made the kitchens appear even more unusual.

Also on show, was a concrete table with a crumbled concrete base, which provided exhibition visitors a place to sit.

Rosinke and Chmara have previously presented kitchen concepts at various design weeks and exhibitions, for instance, they presented a design called Cucina Futurista 2.0 at Vienna Design Week in 2015.

Chmara is currently building on this long-term research by writing a PhD about the future of the kitchen.

Despite the mobile and playful nature of the studio's designs, he and Rosinke believe the kitchen has an important and exciting role to play in the future of the home.

"Time and economically efficient gastronomy in urban spaces is, in some ways, making cooking obsolete," they said.

"We want to feel the textures of ingredients, perceive different temperatures, we want to hear sizzling and boiling, we want to smell aromas and see glorious colours."