The Maldives has partnered with architecture studio Waterstudio to create a brain-shaped floating city that will house 20,000 people in a lagoon near the country's capital.

Called Maldives Floating City, the development will contain 5,000 low-rise floating homes floating within a 200-hectare lagoon in the Indian Ocean. As sea levels rise, so too will the city, which will be built upon a series of hexagonal-shaped floating structures.

In the Maldives, 80 per cent of the country sits less than one metre (three feet) above sea level.

With the Maldives islands predicted to be uninhabitable by 2100 due to rising sea levels, the government of the Maldives hopes to offer up to 20,000 locals and foreigners the opportunity to move to the floating city as early as 2024.

Construction is planned to begin later this year on the development, which will be 10 minutes by boat from the Maldivian capital Male.

"This first-of-its-kind island city offers a revolutionary approach to modern sustainable living perched against a backdrop of the azure Indian Ocean," said the studio.

Maldives Floating City is among a number of floating city proposals, including Oceanix Busan by architecture firms BIG and Samoo and tech company Oceanix that are designed to offer a housing solution to rising sea levels and global temperature increases.

However, developer Dutch Docklands claims that none have been attempted on this scale and at this speed with full governmental support.

"While attempts at floating cities have been tried before, none have featured Maldives Floating City's most compelling selling points: full-scale technical, logistical and legal expertise," explained Dutch Docklands.

Artificial coral banks will be attached to the underside of the floating city to stimulate natural coral growth.

The living platforms will support houses, hotels, restaurants, shops, a hospital, a school and a government building. 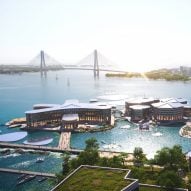 Waterstudio, Dutch Docklands and the Maldivian government drew on the sea-faring culture of the Maldives for the concept.

"As a nation at the front lines of global warming, the Maldives is perfectly positioned to reimagine how humankind will survive — and, indeed, thrive — in the face of rising seas and coastal erosion," said the Dutch Docklands.

The Intergovernmental Panel on Climate Change (IPCC)'s Sixth Assessment Report 2022, states that small island nations such as the Maldives may become completely uninhabitable as the world is on track to warm by two to three degrees this century.

"The world faces unavoidable multiple climate hazards over the next two decades with global warming of 1.5°C (2.7°F)" the report by the United Nations' climate change panel said.

"Even temporarily exceeding this warming level will result in additional severe impacts, some of which will be irreversible."

"Risks for society will increase, including to infrastructure and low-lying coastal settlements."

Viable solutions for urban development into the ocean listed in the report include elevating houses on stilts and creating "amphibious architecture" that can float on the surface of rising floodwater.

The images are courtesy of Waterstudio/Dutch Docklands Maldives.