London studio Emil Eve has retrofitted its Hackney office to include a striking green-painted floor and modular birch plywood furniture designed to be "reconfigured or adapted as the needs of the users change".

The architecture firm created the studio space, which it shares with design practices OEB Architects and Material Works, in an existing brutalist building with an exposed concrete structure in Hackney, east London.

Called Regent Studios, the office was carefully designed so that no changes had to be made to the fabric of the building, according to Emil Eve.

Instead, the firm created a "family" of modular, CNC-cut birch plywood furniture that fits into the space without having to be fixed to the existing structure.

"The furniture is freestanding so that it can be reconfigured or adapted as the needs of the users change," Emil Eve co-founder Emma Perkin told Dezeen.

As well as linoleum-lined desks and small shelving units, this group of furniture includes a standout floor-to-ceiling "sample library" where the architects display and interact with a range of material samples.

Shallow upper display shelves are combined with deeper, lower storage compartments to create a unit that takes cues from the design of kitchen cabinets.

"We knew we wanted the material library to be the main focus of the space, with everything visible to hand," said Perkin, who designed the system to replace "inefficient" stacked boxes.

The architect also explained why the firm used the CNC process to create the furniture, which was fabricated by Natural Buildings Systems.

"The process enables complex shapes to be cut from sheet materials," she said. "Here, we used slits cut into the shelves to create an interlocking design that creates a hierarchy between framing, horizontal and vertical elements, which brings a rhythm to the whole." 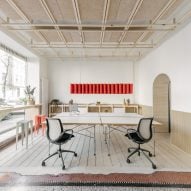 Emil Eve chose bold green paint for the flooring, which was used for its cost-effectiveness and ability to transform the mood of a space, according to the firm.

This colour was also decided upon to complement the windowsill herbs and various potted plants scattered around the studio, as well as to contrast with a cluster of bright yellow chairs positioned around a communal work table.

As a small design agency, Emil Eve explained the benefits of sharing a co-working space with other design companies in the interest of sharing collective resources – a decision the architects called "economical as well as sustainable".

"It’s always more fun to make things rather than buying furniture off the shelf if you can!" added Perkin.

Emil Eve Architects was founded in 2009 by Emma and Ross Perkin. The firm has completed a number of architecture projects, including many in London.

The photography is by Mariell Lind Hansen.