Madhav Dua's proposal for a multifunctional electric vehicle that can be easily customised with different plug-and-play components has won first place in Dezeen's Future Mobility Competition powered by Arrival.

Called Arrival Multi-Utility Farming Vehicle, or MUFV, the concept comprises a subscription-based electric tractor that can be equipped with a number of different farming tools to create an all-encompassing harvesting vehicle for rural India.

The tractor makes use of plug-and-play technology, which enables it to be configured for a myriad of activities including surface tillage, seeding, baling and other agricultural operations.

It can also be used as a delivery vehicle for crops and vegetables to connect farmers directly to buyers.

Due to the abundance of sunlight in India, the vehicles feature solar panels that provide energy to a mobile electricity reserve, which can be utilised to run farmers' households, as well as serve as a back-up power source.

India classifies cities into a tier system based on the population and urbanisation of each district, with the first tier including more developed cities such as Mumbai, Delhi and Bangalore.

Dua's concept proposes the set up of Arrival microfactories across tier-two regions, which are semi-urban centres with smaller populations and which currently supply produce to tier-one cities.

He envisions tier-two regions expanding their delivery of goods to more rural tier-three locations, which would in turn "localise production, increase affordability, avoid overproduction, and be optimised for specific crops and geographical conditions in different regions of India".

The proposal beat over 170 entries and 9 other finalists to win the Future Mobility Competition, which called for mobility solutions that reimagine the future of transportation.

"This was a unanimous decision," said the judges.

"Dua's proposal takes key aspects of Arrival's unique method for designing and producing affordable electric vehicles and suggests how these could be applied to rural India in a way that could have a truly transformative effect on people's daily lives."

The runner-up of the contest was Unknown Untitled for its proposal to overhaul refuse-management vehicles in Paris with a family of electric autonomous trucks with compact footprints.

Third place in the competition was Mike George, who proposed an autonomous fleet of modular emergency vehicles that can be arranged to form an on-the-go hospital.

Dua received the top prize of $25,000 for winning the Future Mobility Competition. Unknown Untitled won $15,000 for second place, while George received $10,000 for third place, and the remaining finalists received $5,000 each.

See all 10 finalists projects here or read on to find out more about Dua's MUFV proposal:

"Agriculture accounts for the livelihood of about 58 per cent of India's population, contributing 18 per cent to the country's GDP annually.

"The supply chain has several logistical, infrastructural and mobility issues. On average, a farmer travels 12km to reach the nearest marketplace, as opposed to the recommended 5km radius, according to the National Farm Commission.

"The presence of many intermediaries between the farmer and consumer leads to a cost inflation of 250 per cent, and lowers the freshness of produce. Many farmers do not buy farming equipment despite subsidies, due to fixed costs and maintenance.

"The linkage between urban and rural areas requires significant improvement.

"Farming equipment today has a one-size-fits-all attitude, which limits its utility only to the intended purpose. There is a lack of cheap, efficient mobility systems that cater to individualistic needs depending on the budget, size of land and yield.

"Millions of villages connect to highways and market centres with temporary roads that become useless during monsoons. Consequently, farmers cannot deliver their produce to the central market and helplessly sell it in the local market at low costs.

"Apart from agri-mobility, there is a need for the development of motorised public transportation, ambulances and delivery vehicles in these areas.

"It is my belief that, particularly on smaller holdings, not all farm implements will be needed from the outset, which is what makes modular technology a feasible solution.

"The MUFV is a subscription-based all-electric tractor platform with a plug-and-play enabled architecture, on a use-when-needed basis, thus converting the fixed costs to variable costs.

"A drone can be housed, that agricultural researchers and educated farmers can use for precision farming by studying field data, weather patterns, etcetera."

Launched in partnership with electric vehicle company Arrival, the contest asked entrants to identify problems with mobility in their city, or a city they are familiar with, and propose solutions that will improve how people move around their environment.

The contest received over 170 entries from more than 45 different countries around the world. 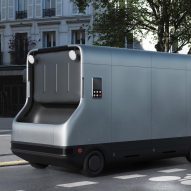 The panel selected 10 proposals as finalists to be published on Dezeen. We are unveiling one finalist a day from 27 June, culminating in the winner being announced on 8 July.

The Future Mobility Competition powered by Arrival is a partnership between Dezeen and Arrival. Find out more about Dezeen partnership content here.