To create the tableware, the designers collected air pollution particles that had settled in different locations across Rotterdam, the Netherlands, in the form of dust and grime.

"We learned that the air quality in our hometown of Rotterdam is much more unhealthy than we think," the duo told Dezeen.

"To inspire people to change some of their choices and improve the air quality, we started to make this invisible problem visible in a personal and intimate way."

The designers used two different methods to source the pollutants, which they took from surfaces in urban locations ranging from car tunnels to industrial areas.

Thin layers of grime were simply sponged off with soapy water before being dried for use as a powder pigment. For denser areas, the designers used what they call the "dry method".

"A specially designed harvest tool, a biodegradable card, helps in scraping the pollution off of the surface," the designers said.

"Locations for harvesting are along roads in the city with intense traffic to collect exhaust and non-exhaust-related particles," they added. "Best are places covered for rain and wind, where settled dust can remain for decades."

Once collected, the pollutants were used to colour a transparent glaze, which was then applied to cups, plates and bowls made from white porcelain clay. 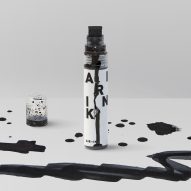 Graviky Labs captures air pollution and turns it into ink

As well as looking at local pollution in Rotterdam, De Kievith and Piscaer have also created glazes based on the pollution in cities including London, Milan, Beijing and Jakarta.

"Iron oxide is the strongest colourant," the designers explained. "Vanadium, part of the dust found close to a steel factory in the north of the Netherlands, gives the dark and matt glaze – beautiful but so undesired in the air you and your kids breathe."

De Kievith and Piscaer created glazes in various colours and opacities to illustrate how many grams of air pollutants people in different cities breathe in over different periods of time.

This was used to determine how much pollution one person inhales over a period of time from 10 to 85 years, which is illustrated through a series of five progressively darker mugs.

De Kievith and Piscaer hope that their tableware, which is safe to eat and drink from, will eventually seem like a relic from a time when air pollution was much worse.

"Hopefully one day the Smogware collection will be a remnant from an incomprehensibly unhealthy era," the designers said.

Previously, Indian startup Graviky Labs captured air pollution and turned it into ink. This was then used in projects including DO Black – a credit card with a carbon-emissions spending limit.

The photography is courtesy of Smogware and Roel van Tour.