Wassily Kandinsky's abstract paintings influenced the colourful yet understated interiors that design studio Holloway Li has created inside the Locke hotel in Munich.

This decision was chiefly informed by the work of 20th-century Russian painter Wassily Kandinsky – a pioneer of abstract art who spent a significant portion of his career in Munich.

"Kandinsky's work explores how we can develop a closer relationship to nature through abstraction, rather than through more figurative approaches favoured at the time," explained Holloway Li.

"He believed that by connecting with the 'innerer klang' (inner voice) of things, an artist could reveal the natural essence of objects and materials."

In line with this idea, the studio stripped back the building to its concrete shell and added a carefully curated selection of furnishings using natural colours and materials where possible.

At the heart of the ground-floor reception is a curved timber desk inset with panels of wheat-coloured carpet, which were also used to wrap the lower half of the room's structural columns.

Beyond the reception is an informal co-working area dressed with plush sea-green sofas and communal timber desks.

Holloway Li placed leafy potted plants around the periphery of the room and along the trellis-style shelves, creating the impression that the nearby Grünwald forest has "grown into and occupied" the interior. 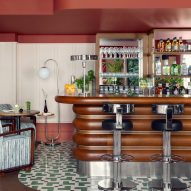 This floor of the Wunderlocke hotel also houses a drinks bar, with the lip of its countertop upholstered in supple teal-coloured leather to encourage guests to get comfortable and hang around for longer.

The upper floors of the hotel can be reached via a terrazzo staircase, which dates back to the 1960s but was updated with a stainless steel handrail.

Painted in natural blue and green hues, each guest suite is designed to function as a small studio apartment with its own lounge area and kitchenette.

If guests don't want to cook in their room, they have the option of eating at Mural Farmhouse – a group of five food and drinks venues spread across seven floors of the Wunderlocke building.

Run by the founders of Munich's Michelin-starred restaurant Mural, the complex encompasses an all-day restaurant, a wine bar, cocktail bar, coffee shop and an upscale eatery.

All of the venues follow a farm-to-table ethos, making use of hand-picked herbs and vegetables from the hotel's rooftop farm, which offers views over the Bavarian Alps.

Holloway Li was previously tasked with designing Locke's location in the London district of Bermondsey, which evokes sunny California deserts.

The photography is by Ed Dabney.