A rattan sculpture winds its way across the ceilings of this office and factory building in Waregem, Belgium, which has been overhauled by Thai architecture studio Enter Projects Asia.

Named A Factory Facelift, the installation was commissioned by the owners of an ice-making factory to bring "balance and calm" to the interior of their small concrete office block in West Flanders.

Beginning with an eight-metre-high sculpture in the glazed lobby, many of these elements take the form of curved sections that are suspended from the ceilings by metal wires and appear to flow through the building.

"[We] were given what felt like a 'wellness' brief for the space, inviting nature and creativity into an industrial setting," said EPA.

"The site was an ice-making factory, so the design was to be fluid and liquid, like the properties of pure spring water crystallising, incorporating raw and sustainable materials wherever possible," it continued.

Beneath the ceiling sculptures and continuing the same design language, EPA has also designed rattan seating areas that help to divide the office spaces.

Planters have been built into these curved seating structures, complemented by trailing plants that hang from the rattan ceiling sculptures. 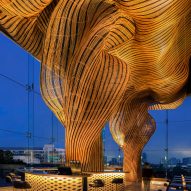 The project was commissioned early on during the Covid-19 pandemic, meaning the relationship between the studio and the client was entirely remote.

This led to the rattan works being digitally designed and then split into segments that could be built and transported as efficiently as possible to the site, and assembled "like a 3D jigsaw".

EPA believes that it is important to give the craft of working with rattan new applications, as many rattan factories became threatened with closure during the pandemic.

"As a byproduct of this project, rattan factories were able to stay afloat during the darkest days," said EPA Director Patrick Keane.

"This project became a lifeline for many craftsmen who otherwise would have been without work. Maintaining these factories ensure local, sustainable arts & crafts production could continue," he added.

EPA has made extensive use of rattan in its previous projects, including another large-scale rattan sculpture for the interiors of the Spice & Barley restaurant in Bangkok.

Elsewhere in Thailand's capital, it used the material to create a series of rattan pods with dynamic forms for the yoga brand Vikasa.