International studio Atkins is set to renovate the central station in Nairobi, Kenya, adding canopies that were informed by central African Boma enclosures.

Designed by Atkins, the renovated station would consist of a pair of fan-like canopies positioned on either side of the main tracks.

Built alongside the station, which was one of the first stone structures in the city, the main canopy will open onto a redeveloped square.

It would be topped by an undulating roof supported on a steel structure and connected by a bridge to a similar canopy on the other side of the tracks. According to the studio, the form of the building was informed by central African Boma enclosures.

"The station form is inspired by the Boma – a circular community enclosure rooted in the heritage of Kenya and broader African culture," explained Atkins design director Chris Crombie.

"Because of its distinct fortified form, Bomas were commonplace in central Africa creating places where people could come together," he told Dezeen.

"We envisage the station in a similar way – a generous, democratic space at the heart of the city, providing a unique, open, welcoming place protected from but connected to the city beyond." 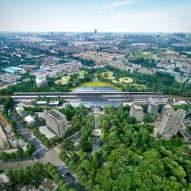 MAD unveils Train Station in the Forest in Jiaxing

The station is set to be developed to handle up to 30,000 passengers per hour as the Kenyan rail network is upgraded, but Atkins also aimed to create a space that would be used by those not travelling.

"A concept of 'big roof, small station' was developed in response to the expected passenger growth," said Crombie.

"The plan favours open, public concourse, linked directly to the public realm, and minimises ticketed passenger-only spaces, creating a new city-integrated destination, which is more than a facility to simply board and alight trains."

The station's public areas, including ticket booths and cafes, will be sheltered by the main canopies and open to the surrounding city.

"Although equatorial, Nairobi's elevation at around 1,800 metres above sea level means it enjoys a year-long temperate climate and allows the station to be designed to naturally ventilate without mechanical ventilation or cooling," said Crombie.

"Heavy rain is also a key characteristic of the climate and results in flash flooding across the city's central areas," he continued.

"To address this, the station roof is designed to collect and direct run off to attenuation tanks then recycled to irrigate of the public realm planting or within the station's grey water system."

The station forms part of a wider plan to redevelop 425 acres of central Nairobi.