Artist Morag Myerscough has unveiled a colourful reinterpretation of the original gatehouse at Housesteads Roman Fort alongside Hadrian's Wall in northern England.

Named The Future Belongs To What Was As Much As What Is, the pavilion stands on the site of the original northern gatehouse at the fort, which dates back to 122AD.

Commissioned by English Heritage, the 8.5-metre-high and 12.5-metre-wide structure replicates the size of the original Roman gatehouse.

It was created to mark 1,900 years since construction began on Hadrian's Wall – a 73-mile-long defensive fortification that marked the northern border of the Roman Empire.

"Hadrian's Wall is one of England's most iconic landmarks and to mark its anniversary, we wanted a meaningful way to connect people of 2022 back to 122AD," said English Heritage chief executive Kate Mavor.

"We hope that placing such a bold contemporary art installation in this ancient landscape will not only capture people's imagination but maybe also challenge their ideas of what the wall was for," Mavor said.

"Not just a means to keep people out, but a frontier that people could – and did – cross."

The reimagined gatehouse was constructed from a scaffolding frame and covered in brightly coloured panels designed by Myerscough. Visitors to the site will be able to climb the structure to see views across the site.

The panels, which were designed to contrast the surrounding landscape, were informed by artefacts found at the site that are on display at Chesters Roman Fort museum in Northumberland. 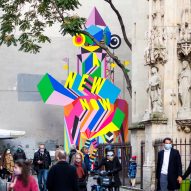 "The moment I saw Housesteads and started walking around the fort I had an overwhelming feeling of wanting to make an installation there," Myerscough said.

"I stood in the remains of the north gatehouse and I looked at the wilderness that appeared to be unchanged since Roman times and I knew immediately that was the place."

The words were chosen in collaboration with poet Ellen Moran and members of the local community, who also painted some of the panels.

"It was so important to me, and to English Heritage, that the work was a collaboration with the local community and that it relates to the people it is for," Myerscough said.

"The whole work has been created and made with the local community, we have made it together."

London-based Myerscough has created numerous bright installations across the UK. She recently responded to the coronavirus pandemic with a colourful installation in Paris and a bamboo pavilion to bring "unexpected joy" to passersby in London.