Local architect Yvette van Zyl has created a home for herself and her husband in the seaside town of Mossel Bay, South Africa, combining nautical and modernist influences with a rich palette of textures, materials and colours.

Perched on a slope facing the ocean and harbour, the three-bedroom home has a rectilinear form that sits atop a dark brick plinth and overlooks the sea through porthole-like windows.

"The shape of the house evolved through a process of orienting all the spaces at the ideal angle for passive design in this location, then carving them out of the solid parallelogram form in stereotomic fashion," Yvette van Zyl told Dezeen.

"[This] resulted in some beautiful, curved, sculptural interior spaces, with the ample use of skylights allowing for a constantly shifting dramatic play of light as the seasons change."

The home's two bedrooms are located at either end of the plan, with a living, dining and kitchen space at the centre. They open onto a balcony that runs the length of the northern elevation.

In its middle, the balcony expands to create a sheltered internal courtyard that is surrounded by perforated brick walls and can be closed off in cooler seasons using bifold glass doors.

Contrasting the openness of the living area, the rest of the home's spaces feature small, carefully-placed porthole windows and areas of movable louvres for ventilation.

"There are no conventional windows, and all of the ventilation happens via custom-framed glass louvres, which is in keeping with the almost 1970s character of the house," van Zyl explained. 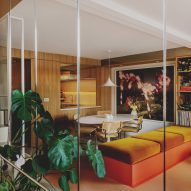 Concrete ceilings and floors and walls of exposed or painted brick bring a variety of textures and colours to the interiors, intended to take advantage of the different qualities of light throughout the day.

"The fact that it was my own house meant that it was the perfect opportunity to experiment and make bold design decisions – colour and tactile choices are very personal ones," van Zyl said.

"A coherent thread is the use of the dark brick floors, which creates a laid-back, relaxed atmosphere but is also paramount in mitigating the glare from the bright light," the architect continued.

The design of the home has been used by van Zyl to start her own firm, YvZA, based in Mossel Bay.

The photography is by Frances Marais with styling by Storm Ross and production by Lookbook Studio, unless stated otherwise.