British artist Morag Myerscough has created an aerial installation of 105 flags for the Clean Power campaign, which aims to encourage conversation about renewable energy.

"It felt really important to make energy a positive thing because, at the moment, it's really negative," Myerscough told Dezeen.

"Renewables are positive – it's the future, and we want people to connect with that."

By using simple, bold and colourful words for the Clean Power campaign, Myerscough aimed to create "powerful positive messaging" that is easily understood.

"I think art is a way into people's understanding and connection," she said. "It's not a branding thing; it's activism."

The four-metre-long flags are made of recycled plastic from marine environments. The installation marks the first time Oxford Street's flags have been curated by an artist and the first time they have promoted an environmental cause.

"It is so wonderful to see Europe's busiest street filled with colour and hope," said Myerscough.

"The oranges, greens and blues represent the sun, sea and air that we need to power ourselves to a renewable future." 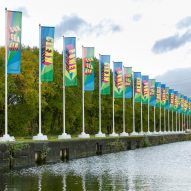 The Clean Power aerial installation will remain on Oxford Street for four weeks before embarking on a world tour to countries including Japan, the US, Italy, Australia and New Zealand.

"It's important for me that it's right there for everyone to see," Myerscough said. "Hopefully, this will induce dialogue."

The Clean Power campaign, which was established by non-profit organisation #TogetherBand, partnered with Oxford Street with the hope of amplifying its message of renewable energy to visitors and businesses.

"Where we've gone wrong about climate conversation is the general message is quite data heavy and science-based," said Oliver Wayman, founder of the Clean Power campaign. "We need to find ways of being able to condense this information."

"You can get a strong emotional response straight away by looking up at the flags and thinking, what does this mean and what can I do?" he told Dezeen.

"We were very keen, particularly in the key parts across Oxford Circus, not to put any logos on," Wayman explained. "It's pure art. It's pure design."

Myerscough previously collaborated with Clean Power during the COP26 climate conference, where she designed a series of flags and banners across the host city, Glasgow.