Design duo The Back Studio has combined off-the-shelf components with handmade neon tubes to create a series of industrial-style lighting designs.

The Back Studio designers Eugenio Rossi and Yaazd Contractor created their designs using elements that are typically used for industrial or architectural purposes.

"What we really like to do is combine objects from different places and see how they can fit together," Rossi told Dezeen.

"Some of these objects are usually hidden in architecture or you don't notice them," he continued. "So we try to create compositions that give these elements more importance."

The duo presented their most recent works in the disused hospital buildings that played host to the Alcova exhibition during this year's Milan design week.

The works were dotted through the old buildings. Some were fixed to walls while others were placed in more prominent positions, for instance, one rose up through an open stairwell.

This particular work, called Assemblage n.25, uses the metal tubes and shelves of a standard modular storage system to create a grid of light and colour.

"We were trying to show how you can decontextualise an object by bringing it into another environment and extrapolating it from its original use," said Rossi.

A key element of The Back Studio's designs is the relationship between the glass lighting tube and the prefabricated components.

The designers use neon lights in a range of colours, using gases like argon and krpyton as well as neon. They sometimes also add coloured glass to amplify the effect, using Murano glass whenever possible. 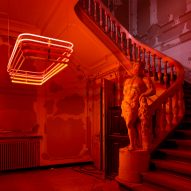 "When the light is off, you see colour. But when it's on it completely changes," said Contractor. "You can see the gas go through; it moves and sometimes shakes a little bit."

"So you have this soft, delicate thing juxtaposed with these hard industrial objects."

Rossi and Contractor first started producing these works while studying at the School of the Art Institute of Chicago.

They both lived in a shared house that had a studio at the back, which they started using it for design experiments. This is why they call themselves The Back Studio.

Rossi is now based in Turin, Italy, while Contractor is living in Mumbai, India, but they still collaborate on works.

They have recently been involved in exhibitions in New York, Milan and Chicago, and are also producing bespoke pieces for one-off commissions.

They hope their designs show that industrial components can offer a warm and playful aesthetic.

Other highlights from the Alcova exhibition at Milan design week included a machine that can apply colours and gradients to aluminium, and textiles that incorporate images of wildfires.