Supertall skyscrapers are becoming increasingly common in North America outside of New York. Here are six designs by architects including Frank Gehry and SOM for supertalls that are planned across USA and Canada.

Supertall skyscrapers, which are defined as those that exceed 300 metres in height, are currently being planned that would become the tallest buildings in cities including Miami, Toronto and Austin.

Since the construction of the Chrysler Building – the world's first supertall skyscraper – in 1930, around 30 have been built in North America, with the vast majority in New York.

However, in the past few years, architects including Frank Gehry, SOM and Kohn Pedersen Fox (KPF) have been commissioned to design buildings over 300 metres tall for various other cities on the continent. 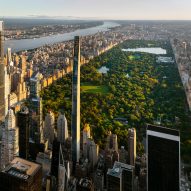 While countries like China are turning away from the supertall skyscraper with national bans, construction of them in North American countries continues to increase.

Below are six proposed skyscrapers planned for construction in cities outside of New York.

David Childs, of Chicago-based SOM, is the architect responsible for the design of One World Trade, the tallest skyscraper in the Western Hemisphere.

400 Lake Shore will be a pair of towers built at the end of the Chicago River on the site where Santiago Calatrava's Spire was originally supposed to be built.

New York architecture studio Kohn Pedersen Fox has released plans for the first supertall skyscraper to be constructed in the Texas capital, which has seen an explosion of growth in the last few years.

Set to be built on Red River Street, the structure will slope up and away from the Colorado River. The plans for the tower have a thick base supporting a thinner volume, with exposed steel beams marking the separation.

With HKS as the architect of record, the skyscraper will have residential, retail and office spaces and be the tallest building in Texas.

The Waldorf Astoria will reach 319.7 metres tall and will be the first supertall completed in the Floridian city if it sticks to the proposed 2026 completion date.

Sieger Suarez Architects collaborated with Uruagyuan architect Carlos Ott for the design, which includes a series of offset stacked volumes.

The skyscraper will be on Biscayne Boulevard in Downtown Miami.

In 2020 New York studio ODA announced plans for a 361-metre-high skyscraper to be built in Downtown Seattle.

Partly inspired by changing needs due to the pandemic, the skyscraper features a void in the middle that will be filled with greenery.

Primarily zoned for residential usage, the skyscraper will be the first supertall to be completed in the city.

Find out more about Seattle Tower ›

Renowned architect Frank Gehry announced earlier this year revised plans for a pair of skyscrapers in Toronto. The tallest of the two will clock in at 298 metres.

The project has been in the works for almost a decade, taking on a variety of different forms.

Though his studio is based in Los Angeles, Gehry was born in Toronto, making the project – the tallest residential tower he's ever designed – somewhat of a homecoming for the architect.

Find out more about Forma ›

On Bay Street in Toronto, Swiss architecture studio Herzog and de Meuron has plans to build a 324-metre-tall skyscraper.

Superskinny as well as super tall, 1200 Bay Street will have residential, commercial and retail functions. The designs show a tower with floor plans of various heights all lined with a glass exterior.