Dutch design studio Loop Loop has built a machine that can apply colours and gradients to aluminium at a small-scale, affordable level, which was displayed at Milan design week

Presented in the Alcova exhibition at Milan design week, the Magic Colour Machine is a fully automated aluminium-anodising device that can be used to customise various aluminium components.

As well as being able to add colours, the machine can also remove them. This means that components can be endlessly recoloured with different finishes, potentially extending their lifespan.

Loop Loop's Rotterdam-based founders, Odin Visser and Charles Gateau, believe the design can disrupt an industry that is largely centred around mass production.

By transforming a factory process into something that can be carried out at a localised scale, the pair hope they can kickstart a movement of mass customisation.

"We think we've found a sweet spot between customisability and affordability," said Visser, who has a background in product development.

"With anodising, we can transform a relatively standard material into something unique," he said, "and because we don't do it manually like craftsmen – it's an automated process – we can make it efficient and flexible."

The anodising process involves creating a thin aluminium oxide layer on the outer surface of the metal. This is achieved by placing the components in an acid bath and running a current through it.

Gateau, who is also a tutor at Design Academy Eindhoven, drew from past experience in material science to engineer the Magic Colour Machine to manipulate this process. 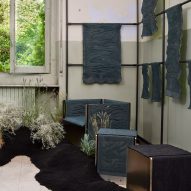 The machine is programmed by a small computer, allowing each stage in the anodisation process to be completely controlled.

This makes it possible to achieve specific colours and finishes. It also create the possibility of gradients; objects are simply moved through the liquid at a slowly accelerating speed.

"If you want a double gradient, we flip it around and do it again in another colour," explained Visser.

Every object is given a unique code that relates to how it was produced, so that the component could be easy replicated or replaced in the future. The idea is to support a circular economy.

"The main goal is to extend product life through its design and production," said Gateau, "holistically looking at modularity, simplicity of build, reversibility, pieces of serial tracking, local and social production."

The Magic Colour Machine applied different colourways to the Fade Pendant across the eight days of the exhibition, with five produced every day.

The colours selected were based on the Alcova surroundings.

Along with the machine, Visser and Gateau installed their own customised aluminium-framed workbench in the space. In line with their circular ethos, this piece of furniture was made from standards components and fully demountable.

"Aluminium is very easy to recycle but its production is quite energy consuming, so we are also looking into post-consumer and post-industry aluminium," added Visser.