The dismantling of the metabolist Nakagin Capsule Tower in Tokyo has begun, with the interiors of its modular capsule homes already resembling a "demolition site".

The iconic Japanese housing block, which was designed by architect Kisho Kurokawa, is being demolished due to the decay of its concrete and steel structure.

Its interiors are in the process of being emptied out in preparation for asbestos removal, which will then be followed by the building's complete disassembly.

Plans to disassemble the tower were confirmed last year, prompting residents to begin crowdfunding to preserve, donate or relocate the capsules.

One of the groups retaining a module is named the Nakagin Capsule Tower A606 Project, which is restoring and modifying the capsule numbered A606.

The Nakagin Capsule Tower A606 Project told Dezeen that while today marks the beginning of demolition works to the building's exterior, much of the tower's interior has already been dismantled.

"Demolition work will start on 12 April, but interior dismantling and other work has already started," the group's representative Akiko Ishimaru said. "So inside it already looks like a demolition site," she told Dezeen.

Ishimaru stated that demolition work will begin with removing any remaining interior elements, alongside asbestos.

Following this, the capsules will be removed and then the concrete towers that support them will be demolished. Demolition is expected to take until the end of 2022. 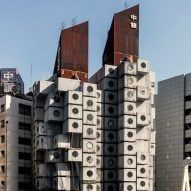 Prior to 12 April, Ishimaru and the Nakagin Capsule Tower A606 Project have been documenting the building with measurements, photos, videos and 3D scans.

The group plans to preserve one of the pods and transform it into a "mobile capsule", which it said will honour "Kurokawa's concept of 'architecture in motion'" and adaptability.

Kurokawa, who died in 2007, designed the Nakagin Capsule Tower housing during Japan's metabolist movement, which he pioneered along with Kiyonori Kikutake and Fumihiko Maki.

Metabolist architecture championed buildings that were adaptable and replaceable.

The Nakagin Capsule Tower's tiny homes were designed to be rotated out and replaced every 25 years. A lack of funding meant this was never realised, leading to their dilapidation.

Kurokawa's goal for the tower was to attract single businessmen looking for a compact and conveniently located apartment.

Each of the building's capsule homes is animated by a round window and measures 2.5 metres by four metres. They contain built-in living spaces and furniture.

"While we were inside the capsule surveying the capsule, we saw many people outside the window," reflected Ishimaru. "They seemed to have come to see the last of the building." 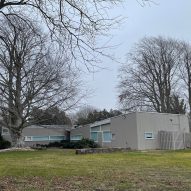 Twentieth century architecture is under threat in cities around the world. One of the most vulnerable styles is brutalism – buildings characterised by bold monolithic forms cast from concrete.

In the USA alone, brutalist icons including Paul Rudolph's Burroughs Wellcome building and Shoreline Apartments are among those to have fallen victim to the wrecking ball.

In a series of interviews, architectural historians recently told Dezeen that this wave of demolition is partly by political ideology but also by the ageing nature of these buildings.

The photography is courtesy of the Nakagin Capsule Tower A606 Project unless stated.