Dutch studio MVRDV has begun construction on a mixed-use building in Tirana, Albania, which it has modelled on a bust of the country's prominent historical figure Gjergj Kastrioti.

The 85-metre-tall Skanderbeg Building, known formally as Tirana's Rock, was designed by MVRDV to double as "a figurative sculpture" of Kastrioti.

Kastrioti was a military commander known locally as Skanderbeg who revolted against the Ottoman Empire in the 15th century.

The building is set to be constructed in Skanderbeg Square, a plaza named after him in the capital's centre, alongside his statue on which MVRDV's design is based.

The building was commissioned by investors ANA and VI&VI to celebrate the country's cultural history. It is being designed with local architecture firm Sfera Studio.

According to MVRDV's founder Winy Maas, it also emphasises "Albania's history, character, and presence" as the country begins its negotiations to join the European Union.

"These days, cities around the world increasingly look like each other – I always encourage them to resist this, to find their individual character and emphasise it", says MVRDV founding partner Winy Maas.

"To me, the Skanderbeg Building is an opportunity to do just that. It brings new meaning to existing elements of Albanian architecture."

The Skanderbeg Building is under construction on an "awkwardly shaped site" at the square's northeastern corner, which it has been designed to fill out.

"His shoulders align with the widest part of the site, while his head is turned to the right, facing the square that carries his name," MVRDV explained.

Once complete, it will contain one level of commercial space and four levels of offices in the widest part of the building that resembles Kastrioti's shoulders.

Above this will be 20 floors of residential apartments, occupying the upper portion of the building that is modelled on his head.

The subtle head-like appearance of the building is largely achieved with curved balconies on every level.

Each one has been sculpted by MVRDV with a unique form, creating protrusions that echo a nose, ears, and beard. 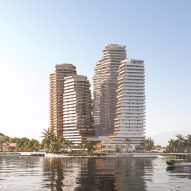 "The resulting effect is somewhat subtle; people may need to look twice to understand the building's shape, depending on the angle from which they see it," said MVRDV.

"This expressive approach fits seamlessly into a city that has developed a tradition of mixing art and architecture as part of its post-communist renaissance."

By using balconies to create the building's irregular shape, MVRDV ensured that the interiors have as rational a floor plan as possible.

They will also provide occupants have plenty of outdoor space, while their overhangs offer solar shading for the floors below.

The balconies will be finished with built-in planters that will be filled with native plants, dividing them up for adjoining apartments.

Glass balustrades will have a gradient finish, lending them a marble-like appearance. At night, they will be illuminated by lighting strips on the underside of the balconies to highlight the building's form and create "a beacon" for the city.

Natural ventilation will be maximised throughout the building to reduce its energy requirements. Rainwater harvesting facilities and a heat recovery system will also play a role.

MVRDV, an internationally-renowned architecture studio based in Rotterdam, was founded in 1991 by Maas and architects Jacob van Rijs and Nathalie de Vries.

Elsewhere, the studio is also converting the Centraal Beheer building in the Netherlands into a housing district and developing a cluster of six interconnected skyscrapers in Ecuador.

The visuals are courtesy of MVRDV.