Designers and academics have created a series of objects, including a bright-red wooden chair based on a medieval design, to furnish a 700-year-old castle in Northumberland, England, for the (Re)imagining Aydon exhibition.

(Re)imagining Aydon responds to the history, setting and atmosphere of Aydon Castle, a fortified manor house set in a secluded woodland close to Hadrian's Wall.

Aydon Castle dates back to the 13th century and is one of the best-preserved fortified manor houses in England. It was taken into the custody of English Heritage in 1966 and is now open to the public as a historic site.

The exhibition was initiated by School of Design senior lecturer Anthony Forsyth, who approached English Heritage with the idea of creating a series of design objects that celebrate the castle's history and the ingenuity of those who occupied it over the centuries.

"A place like Aydon Castle really fires the imagination and makes us wonder how these spaces would have been furnished and decorated throughout the past 700 years," Forsyth told Dezeen.

"I'm interested in the idea of material imagination and how our experience of buildings is often informed by deeply rooted imaginative themes," he added. "This project is about using history as a creative resource to inform new hybrid objects that combine contemporary and historical elements."

Many of the castle's remaining features date back to the Middle Ages and several of the designers chose to reference forms and motifs from this period. Others took inspiration from the building's architectural fabric, including masonry features such as corbels and door lintels.

Forsyth's own Plank chair is informed by the way early furniture was made, using simple planks and basic joinery to create what was known as 'boarded' furniture.

Chairs would have been high-status objects in the Middle Ages and the Plank chair is stained red using a pigmented linseed oil to reference how strong colours provided symbolic meaning and denoted wealth.

A set of chairs designed by Mac Collins, the first recipient of the London Design Museum's Ralph Saltzman Prize for emerging talent, and British designer Joe Franc nod to the stone-built castle's fortifications.

The Sentinel chairs feature imposing straight lines and humanlike silhouettes, intended to evoke sentinels garrisoned at the castle to withstand raids from the north.

Designer and senior lecturer at Northumbria University Rickard Whittingham developed a lounge chair and a series of stools assembled from offcuts and informed by the elemental construction of Aydon Castle's fireplaces.

Forsyth produced a series of lighting objects based on research that highlighted the importance of light during the early days of the castle's existence.

The Torche lamp evokes the rushlights that would have been used as a portable light source when walking around the manor house. The lamp features a base made from blackened steel to reference the castle's surviving ironwork.

The Buttress candelabra is inspired by the walls and towers that form the castle's defensive ramparts. It is made from weighty cast iron that evokes the robustness and heft of the building's construction.

The designer also reimagined a bowl-shaped medieval lamp called a cresset, which would have contained fat or wax together with a wick. This modern version uses the traditional process of sand casting and features a polished inner surface that reflects the light.

"Our research uncovered lots of historical accounts on the importance of light, which people used to think was emitted by objects whereas we now understand that it is reflected," Forsyth said. "Shiny objects were highly prized because they required a lot of labour to produce and they seemed to give off more light."

Openings in the castle walls that allow light to enter inspired the Aperture collection of vessels created by designer Trevor Duncan. The brass-plated objects replicate the proportions of these openings and feature chamfered edges that reference the refined detailing of the stonework.

"Wandering around the castle I found that the various doorways and window openings provided the most distinct and event-like experiences," said Duncan.

"The castle is dark and solid, and the contrasts created by the light spilling through these openings act like a series of announcements and invitations, bringing the outside in."

Designer Lewis Power developed a pair of candleholders based on archetypal medieval forms that he reduced to a series of simple shapes. The objects are made from aluminium and iron using a sandcasting technique that dates back several centuries. 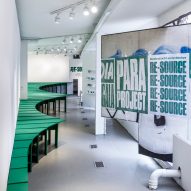 Forsyth also worked together with Fiona Kitchman and Gary Martin to create a hooded garment based on a medieval typology called a gugel.

The designers reimagined the gugel as a practical modern garment, made from old outdoor jackets and textile remnants. The fabric is quilted for warmth and the gugel includes pockets for holding a carpenter's tools.

The (Re)imagining Aydon project took place over the course of a year, with the designers making repeated visits to the castle to engage with the building and to learn about its past from English Heritage's historians and curators.

According to Forsyth, one of the exhibition's main objectives is to challenge misconceptions of the medieval period, which are often based on the barren appearance of surviving buildings.

"During the Middle Ages a place like Aydon Castle would have been a sensorially rich environment filled with colour, light, smells and very tactile objects," he explained.

"Our designs seek to replicate some of these qualities, while inserting objects back into the spaces allows visitors to use their imaginations to reconstruct what life might have been like here."

Other recent design exhibitions include one that looks at how the Bauhaus influenced Norwegian design and an exhibition that featured demountable furniture that visitors could take home with them.

(Re)imagining Aydon is on show at Aydon Castle until the end of October 2022. See Dezeen Events Guide for all the latest architecture and design events taking place around the world.