Set to open on Friday, the cafe is located on the first and second floors of a building connected to the Kerry Centre in downtown Shanghai, close to the over 1,000-year-old Jing'an Temple.

Keiji Ashizawa Design placed a total of 13,000 handmade brick tiles on the bar counter, stairwell wall and the lounge area of the cafe.

This particular type of bricks, which have semi-circular edges, were made in Yixing, a nearby city that is known for its clayware manufacturing. A new smoking process was used for the surface of the tiles to increase their strength and create a subtle reflective effect.

"As Blue Bottle Coffee commits to create local communities around their cafes, we always determine the materials and design based on the local, both culture and history," studio founder Keiji Ashizawa said.

"Working on a project in mainland China as a Japanese architectural firm, I felt that there was an importance in considering the common aspects between the two cultures," he added.

"With that in mind, we looked through images I photographed and found an image of a roof I took from a restaurant in Chengdu, which inspired me to use roof tiles for the cafe."

A coffee bar that connects both floors is at the centre of the space, while seating and product displaying areas are arranged around it.

According to Blue Bottle Coffee, this is to encourage customers to interact with the process of coffee making.

The stairwell is right next to the bar counter on the first floor so that when people walk up to the second floor, they are able to watch coffee being made at the bar area from different heights.

An open lounge space at the second floor features a hanging paper light above a seating area with dark-brown furniture and leather cushions. 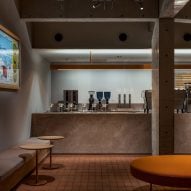 Where the shop connects to the Kerry Centre, a series of semi-circular recessed seating areas have been carved out from the wall on both floors.

The rounded shape of the seating areas not only responds to the roof tiles but also creates privacy for the customers dining in the cafe.

Keiji Ashizawa Design used concrete in a variety of colours and textures all over the cafe, which has structural columns and slabs in raw concrete. Natural oak furniture was selected to add warmth to the interior.

Blue Bottle Coffee was founded as a small roastery in Oakland, California, by James Freeman in 2002 and has since grown into a chain of cafes across the USA and Asia.

This is the second Blue Bottle Coffee shop in mainland China. The first one was opened in February this year, designed by Schemata Architects, also in Shanghai.

The photography is by Chen Hao.