London studio Bell Phillips has completed a timber pavilion in a park in Elephant & Castle featuring an elevated viewing gallery nestled among the boughs of a mature plane tree.

Named The Tree House, it is the centrepiece of a two-acre green space within the Elephant Park development – a regeneration scheme in south London managed by developer Lendlease.

Bell Phillips was approached to design a community space housing a cafe kiosk, toilets and a bookable multipurpose room for the site, which contains several mature plane trees.

The intention is that the pavilion will be used to host various community events and gatherings, which could also be programmed for the adjacent outdoor spaces.

The Tree House forms a gateway into Elephant Park from nearby Sayer Street, with paths extending through the building to connect with the rest of the site that has been designed by landscape architect Gillespies.

"The pavilion is designed to create a seamless flow between park and pavilion, blurring boundaries between inside and outside, enclosure and exposure," said Bell Phillips.

The pavilion has a triangular form, which comprises three volumes connected by an oversailing roof terrace that functions as a viewing platform.

Its framework is largely built from cross-laminated timber, finished with timber cladding and bamboo decking.

Members of the public can pick up a coffee from the kiosk and relax on seating incorporated into the surrounding landscaping, which is shaded by the large, leafy tree.

The 18-square-metre kiosk is located in a unit at the prominent southern corner of the site. The two other volumes house utility spaces including toilets and refuse stores.

A multifunctional space adjoining the kiosk is lined with sliding glass doors that can be closed to create a contained room or opened to connect it with the park.

Two sets of stairs ascend to The Tree House's roof terrace, which encircles the tree and provides views across the park. A visually lightweight metal balustrade on the terrace features angled railings that echo branches. 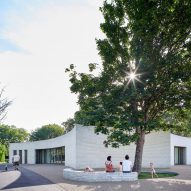 The Elephant Park scheme is located in the Elephant and Castle area just south of the River Thames and is being developed to provide over 3,000 homes along with public green spaces.

It is partly built on the former site of the Heygate Estate, a social housing scheme that was bulldozed in 2014. The estate's demolition prompted criticism from the director of the UK's Twentieth Century Society.

Elephant Park was mentioned in a 2017 report by the anti-corruption organisation Transparency International, which found that all 51 properties in its South Gardens development had been purchased by overseas investors.

Its previous projects in London include a ring-shaped steel pavilion inserted into a Victorian gas holder in King's Cross and a curved white-brick pavilion in Southwark Park.

The photography is by Kilian O' Sullivan.