UK studio Heatherwick Studio is designing a park alongside Harley-Davidson's headquarters in Milwaukee, which will contain an amphitheatre for up to 700 motorcycles during rallies.

Envisioned as the first step in plans to revamp Harley-Davidson's headquarters to mark its 120th anniversary this year, the park will be built on a "dull parking space" next to its current office.

The unfenced park, which will be developed with Minneapolis-based HGA, will be focused on a landscaped amphitheatre that will be used to host motorcycles rallies.

"We're creating an interesting place that for 99 per cent of the time will be for the people who work there and along with visitors wanting to see the original place where this incredible, world-famous organisation began," he told Dezeen.

"And then, the very small percentage of time when there are rallies, it forms a motorcycle amphitheatre."

Funded by The Harley-Davidson Foundation, the park will contain 20 species of trees and 120 different plant species.

At its centre, the 83-metre-wide sunken events space will be surrounded by tiered seating and contain motorcycle driveways, turning circles and 360-degree viewpoints. It will be constructed using 10 types of locally sourced brick and weathering steel.

"In a way, it is a theatrical bowl for us all to see each other," said Heatherwick. "So it's really theatrical."

"From historic ancient times we know that acoustically it makes you feel closer to people, it creates a different energy," he continued. "In a way, it's deliberately creating a community heart, and 99 per cent of the time it's an environment for workers and local residents."

The park was commissioned by Harley-Davidson's CEO Jochen Zeitz, who previously hired Heatherwick Studio to design the Zeitz Museum of Contemporary Art Africa in Cape Town.

He commissioned the studio as he wanted a park that was interesting, citing Heatherwick Studio's Little Island park in New York.

"We want to make this a place where people want to come, not just another park," Zeitz told Dezeen.

"We are repurposing the space to make it more inclusive for the Westside community for customers and anybody that is interested in Harley Davidson, so Milwaukee becomes this important destination of for me one of the most iconic brands in the world." 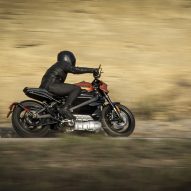 The park, which will open in 2024, forms the first stage in a larger plan to revamp Harley-Davidson's offices, which stand on the site the company was founded in 1903.

"We are starting a multi-phased approach to create more relevance for our stakeholders and in our dialogue, the first thing that came up was the need for a meeting space that is accessible to everybody – that's where the green space idea came from," explained Zeitz.

"So I called Thomas and said we need to think about, for lack of a better word, repurposing or reimagining what office space looks like on one side, but at the same time define what could be the first important step to creating a truly inclusive space for everybody."

One of the world's best-known motorcycle brands, Harley-Davidson is marking its 120th anniversary this year. The company is in the process of evolving into an all-electric brand and launched its first electric motorcycle in 2018.

In 2019 it released two all-electric bike concepts suited to the city.