Australian start-up Hoopsy has created a recyclable pregnancy test that is 99 per cent made out of paper, aiming to stop millions of single-use plastic versions ending up in landfill each year.

The Hoopsy "eco pregnancy test" is made almost entirely out of paper, with cardboard packaging that can be recycled in domestic bins. Only the pouch the test comes in is made of soft plastic and needs to be recycled through supermarket collection.

The company aims for its products to replace plastic home pregnancy tests, 12.5 million of which it says are completed each year in the UK before being thrown in the bin.

Entrepreneur Lara Solomon founded Hoopsy after going through IVF and embryo donation procedures that made her realise just how many times people who are trying to conceive test themselves.

She said she used "countless" pregnancy tests in the 14-day period following her embryo transfer. She then went on to develop the product, naming it after the Dutch word for "hope".

"I feel that when you do a pregnancy test there is a lot of hope – a 'hope I am' or a 'hope I'm not'!" Solomon told Dezeen. "Plus, it also has connotations with jumping through hoops in life, which is sometimes what trying for a baby feels like."

"On top of this, there's hope for the future that this product can help reduce plastic waste," she continued.

Hoopsy has been approved for sale by the UK's Medicines and Healthcare products Regulatory Agency following clinical trials that showed it was over 99 per cent accurate from the day of a person's expected period. 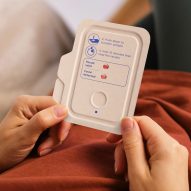 Like most home pregnancy tests, it works by measuring levels of human chorionic gonadotropin (hCG, commonly known as the pregnancy hormone) in the urine.

The test is taken midstream, which Solomon said most users prefer to strip tests that require prior collection of the urine in a container. To use it, a person holds the end of the test with the Hoopsy logo while placing the other end in their urine stream for three to five seconds.

They then place the test on a flat surface and wait five to 10 minutes to read the result. Afterwards, the paper test can be cut in half so the part that's been urinated on can be put in the bin while the clean portion goes in paper recycling.

Hoopy was developed entirely in-house by Solomon and the manufacturer, but she hopes to work with an external design team for the second iteration of the product, which she aims to make from 100 per cent paper.

She would then like to go even further in challenging the pregnancy test market, which also features digital tests that have been shown to sometimes feature extra gadgetry to translate the lines on the test trip into words on a screen.

"I'd love to see all plastic tests phased out eventually," said Solomon. "I think that the pregnant/not pregnant digital screen version instead of two lines is not necessary."

"The 'number of weeks' tests are more tricky to replicate in a non-plastic way, but I am confident we could look at a non-digital version as a way to stop that waste."

Another single-use plastic testing product that has recently been given a recyclable reimagining is the Covid 19-test. Design agency Morrama came up with a concept design made from moulded paper pulp and NatureFlex film.