Raymond Briggs, the British illustrator best known for creating the popular children's picture book The Snowman, has passed away at the age of 88.

The news of the artist's death on 9 August was announced by his publisher Penguin Random House on Twitter and confirmed by the University of Brighton, where Briggs taught for much of his life.

"Raymond Briggs, creator of masterpieces of illustration as diverse as The Snowman and When The Wind Blows, has died at the age of 88."

The award-winning artist is best known for The Snowman, a wordless picture book released in 1978 that follows the story of a boy who makes a snowman that comes to life.

Throughout his six-decade career, Briggs also created a number of satirical books for adults. Among his most well-known works is the graphic novel When The Wind Blows, which was also turned into an animation.

Other famous works by the artist include the books Father Christmas and Fungus the Bogeyman.

The illustrator was born in Wimbledon, London in 1934. He studied at the Slade School of Fine Art before moving to Sussex where he spent most of his adult life.

In 1966 and 1973, he was awarded a Kate Greenaway Medal – one of the highest accolades in British literature. More recently, in 2017 Briggs was recognised for his services to literature and named a Commander of the Order of the British Empire (CBE). 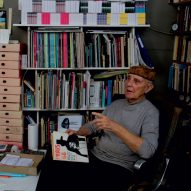 Speaking on the BBC's radio programme Desert Island Discs in the 1980s, artist and former student at the University of Brighton Chris Ridell described Briggs as "hugely influential".

"Raymond Briggs was hugely influential, and really shaped my work," he said. "He'd tell me to just get on and do it – to keep filling up the sketchbook."

Briggs is survived by his step-children and step-grandchildren.

Earlier this week we also lost Japanese fashion designer Issey Miyake, who died at the age of 84.

Images are courtesy of the University of Brighton.