Architects Fanny and Matthew Mueller have completed a lengthy and extensive renovation of their family home in Brooklyn, called 17 at 17, which features floating steps, loft beds and a wood-and-steel bridge.

Encompassing 2,500 square feet (232 square metres), the Brooklyn townhouse is located on a tree-lined street in the South Park Slope neighbourhood. .

Occupying a slender, rectangular lot, the wood-framed building dates to 1901 and underwent various modifications since its construction.

The Muellers bought the house in 2005 and embarked on a 17-year restoration project.

The Mueller's goal for the project was to create a thoughtfully designed home for themselves and their three children.

"We were determined to create a project which reflected our professional passion and our belief of the importance of home as the ‘hearth' of our family," the duo said.

The project entailed a complete overhaul of the existing building.

On the exterior, the architects added two types of fibre-cement cladding, along with creating a new roof and installing skylights. The interior was fully revamped.

Communal spaces – a living room, dining area and kitchen – were placed on the ground level.

The upper floor was re-framed and reconfigured. The central portion was left open to below, enabling daylight to penetrate the ground level and giving the home an airy feel.

Bifurcated by the central void, the upper floor has two sides that are connected by a wood-and-steel bridge.

One side contains a primary suite; the other holds a kid's bedroom with a pair of loft-style sleeping areas that can accommodate full-size mattresses. The bedroom can become two enclosed rooms if desired.

Rising from the upper floor is a short flight of floating steps, which leads to a boxy volume partly suspended over the living room below. An overhead steel beam and a single hanging rod in the corner were used to achieve the suspension.

This volume holds another kid's room. It features a platform bed that is accessed via a wooden staircase with integrated storage. 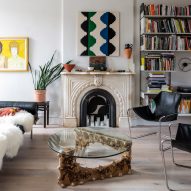 The home also has a basement, where one finds guest quarters and a family room that doubles as an office.

The Muellers used a restrained palette of materials, including seamless epoxy and concrete flooring, white gypsum board walls, and custom cabinets with lacquer fronts and maple trim. Maple was also used for the staircases.

The project unfolded in phases. When the Muellers first acquired the property, they removed old carpeting and linoleum, painted everything white and installed a simple kitchen.

Next, they demolished a rear, one-storey addition and replaced it with a two-storey extension totalling 1,000 square feet (93 square metres).

"When it came time to stitch the existing and new structures together, we moved across the street to a one-bedroom apartment, keeping a close distance to allow us to follow the progress as well as contribute to the work," the architects said.

After a year of work, the family was able to move back into their townhouse, but it was far from being finished. They made slow but steady progress on the to-do list over the years.

"The list continued as money would become available, each step according to the original master plan but often self-executed when hiring contractors was not feasible," the Muellers said.

"Each phase often displaced our family into quieter and cleaner areas of the house, never allowing anyone to fully settle in a room destined for its final purpose."

The dwelling was finally completed this year. With their three kids now in college, the Muellers have decided to sell 17 Jackson Place and build a new home.

"We are investing in another new building project in the South Slope neighbourhood, which will enable us to create a home better suited for the next stage of our family's life," they said.

Fanny – who grew up and studied in France, and earned her architectural license there – is the founder of Fanny Chevalier Mueller. Matthew Mueller, who is American, is a partner at New York-based PBDW Architects.

Other residences in Brooklyn include a renovated townhouse by BAAO that features a giant pegboard wall and pops of colour and pattern and a house by Space4Architecture that has a skylit staircase and minimalist decor.

The photography is by Evan Joseph Photography for The Corcoran Group.