New York studio VonDalwig Architecture has overhauled the bottom two floors of a Brooklyn townhouse, adding in more windows and preserving details inside.

House 22 is in Brooklyn's Clinton Hill neighbourhood and was renovated by Philip and Kit VonDalwig – the husband-and-wife behind the local architecture studio.

The project comprises the reconfiguration of a lower level duplex within a four-storey townhouse for a couple, one of which is a curator, and their young daughter.

"They really wanted us to reconfigure their bedroom levels, and also to bring in more light upstairs," Kit told Dezeen.

"We took the approach to rethink the quality of space, and find some simple and clear moves to bring more value and spatial quality to the home."

The bottom floor, which has access to a back garden, contains two bedrooms and bathrooms.

The floorplan is rectangular and has an entry on its street-facing side, as well as a door in the back bedroom that accesses the patio.

In the rear master bedroom, the studio added a large square window framed in wood, to double as a reading nook.

"We enlarged one window towards the yard and eliminated one window that just stared under the deck stair, therefore focusing the master bedroom to the better viewpoint," Kit added.

The bathrooms for the bedrooms have been moved and joined together, to save space and create a back hallway, which accommodates a shared closet.

"We reorganised the garden level moving the master bedroom to the rear and creating a cool hallway behind a set of bathrooms that serves as closet and access," said the designer. "It connects the two bedrooms too but also a buffer space."

Upstairs is the home's main living space with a sitting room, anchored by an original fireplace, and a kitchen located in the rear.

Framing a wooden dining table is a window with an arched top, which VonDalwig Architecture added to bring more light inside. The opening is next to a glass door that opens onto an outdoor step down to the garden. 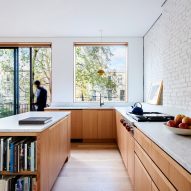 Eight Brooklyn townhouses that make creative use of small spaces

Other updates to the 1,930-square-feet (179-square-metre) residence include wide plank engineered wood flooring, cabinets, and moulding that has been repaired and painted white to match white walls.

In the kitchen, the cabinetry is an IKEA PAX system hacked with Reform Basis fronts in matte white.

In one bathroom is grey Ceppo di Gre stone from Italy, while another has a dark engineered marble created as a versions British Max Lamb's Marmoreal.

"Together with a more neutral palette – imagine former blue walls – to offer a background for the varied art pieces from the client, the duplex transformed into a new form of its former elegance," Kit said.

Other accents include a selection of five different Junit pendants by Schneid, led by designer Jula Jessen, along with an Acoya light and a Hoist Sconce both by Brooklyn studio Rich Brilliant Willing.

VonDalwig Architecture has completed another townhouse overhaul in Brooklyn in the area of Park Slope with a rear extension.

The New York City borough is home to several townhouse renovations, including a project by GRT Architects with a green kitchen and a dwelling with a large window in Williamsburg.