Irish studio Clancy Moore Architects has created The Writing Room in the garden of a Dublin home from recycled aluminium and red-stained beech.

The structure, which was built off site and craned into the home's garden, has a geometric aluminium exterior, red timber walls and a V-shaped mirrored ceiling.

According to the studio, the limitations imposed by this method of construction informed both the shape and size of the structure.

"The crane required corner lifting eyes at the same height – and this drove the profile to make the roof a butterfly shape rising to the same height on all corners," studio co-founder Andrew Clancy explained.

"The size was also limited by the bed of the truck that would transport it, height of bridges between the factory and the site, and the width of the spreader beams that hold the room when it is being hoisted," Clancy continued.

"Quite a few neighbours and passers-by gathered to watch it being craned over the house. In many ways it became part of the story of the project."

On the inside, red-painted timber lines the walls of the hut with pieces angled in different directions to highlight the structure's triangular forms.

"[The timber] is applied in a rhythm of vertical strips to give a texture to the walls of the space," said Clancy. "This is in turn divided into horizontal bands, by stepping the strips each time."

"The intention was to make a detailed, textural interior which didn't become oppressive in prolonged periods of working," Clancy explained.

"The red worked well off the greenery of the garden, and make a warm interior in such a small space." 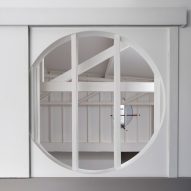 The studio aimed to consider the writer's routine when designing the space and included a desk,  day bed and storage.

"The writer needed seclusion, to be able to work without being seen, and yet to feel connected with the house," said Clancy. "He also wanted the construction to have minimal impact on the household, so our design was aimed at making a simple space, capable of intense inhabitation."

"We had lengthy conversations about the writer's working rhythm, the need for rest as part of work, and the occasional periods of highly focussed attention and lengthy hours," he continued.

A mirror lines one side of the V-shaped ceiling enhancing the size of the small hut and reflecting views of the garden above the daybed.

Other writing spaces featured on Dezeen include a writer's cabin with a wavy bookshelf by Mudd Architects and a glass writer's studio by WT Architecture.

The photography is by Fionn Mccann.