UK studios Hugh Broughton Architects and Pearce+ have collaborated with artists Ella Good and Nicki Kent to create an inflatable building that explores how people would live on Mars.

Set alongside the M Shed museum in central Bristol, UK, the pod structure was created as part of the Building a Martian House art project and will sit on the dockside for the next five months.

Conceived by artists Good and Kent as part of a residency at local arts organisation the Watershed, the Martian House is designed as a prototype shelter for two astronauts.

It is the culmination of a seven-year project to envision how people would live on Mars and what we can learn from this in our everyday lives.

"The project uses the scenario of moving to Mars as a lens to reflect on our lives here on Earth – asking how we live now and how would we like to live in the future," Good and Kent told Dezeen.

According to the duo, it is hoped to become "a place for conversations about the future and resourceful living".

"The future has not been decided, and we can all take part in thinking about how we'd like it to be. We hope people can bring the ideas it provokes for them into their everyday lives," they added.

The prototype Martian House was realised in collaboration with Pearce+ and Hugh Broughton Architects, which brought its experience designing Antarctic research centres to the project.

It consists of a golden inflatable structure, which would form the above-ground section of the house on Mars, set on top of a shipping container that represents the home's below-ground quarters. 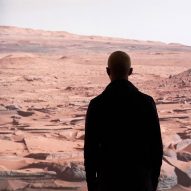 "Surviving on Mars could teach us how to live more sustainably on earth", says Design Museum's Moving to Mars curator

If built on Mars, the inflatable section of the structure would contain living areas and a hydroponic growing room, and be filled with Martian stones called regolith to protect the astronauts from the planet's radiation.

The sleeping areas and toilets would be placed underground, potentially taking advantage of existing lava tunnels.

Each of the two-person pods would be linked with other pods to form a community.

With the project, the team focused on the experience of living on Mars as well as the planet's real environmental conditions.

"We want it to be as grounded as possible in reality, but not to the exclusion of just being able to ask lots of questions of how people would like to live on Mars," he told Dezeen.

"What would be the things that you would want to take there? What sort of decorative design would you come up with if this was your home?"

To determine the Martian House's final form, the team consulted with numerous local groups and the University of Bristol.

"We worked with space scientists at the University of Bristol, who educated us in the environment that exists on Mars, the feasibility of placing accommodation underground and above ground, what you need to do in terms of protection from cosmic and solar radiation, and also what levels of insulation you need for the low temperatures," added Broughton.

Numerous architects and designers are considering how homes could be built on Mars, with BIG collaborating with ICON and NASA to explore a "new Martian vernacular".

Architecture studio Abiboo recently designed a concept for a self-sufficient city on the planet that would house a quarter of a million people.

The photography is by Luke O'Donovan.