The constructivist Railway Workers Palace of Culture in Kharkiv is the latest culturally significant building in Ukraine to have been severely damaged by the Russian invasion.

Photos shared on Twitter show smoke clouds enveloping the building in Kharkiv after a Russian missile is reported to have left it "engulfed in fire" on Thursday night.

Rescue efforts were also captured by video, where firefighters can be seen attempting to stop the fire.

The Railway Workers Palace of Culture, or Palats Zaliznychnykiv, was an architectural monument designed by Russian architect Aleksandr Dmitriev that opened in the southern Ukrainian city in 1932.

Elevated on a granite podium, it featured a fluted and plaster-covered facade that was often compared to a stretched accordion.

It was regarded as the most significant building by Russian architect Dmitriev and a notable example of constructivism – a style of modern architecture that emerged in the Soviet Union during the early 20th century.

Ukrainian media company Babel said the destruction of the Railway Workers Palace of Culture on 18 August contributed to what was "one of the most tragic" nights in Kharkiv since the Russian invasion of Ukraine began on 24 February.

According to the outlet, Russian missile strikes killed 11 people and wounded 37 that evening.

A Russian bomb caused severe damage to the back of the Railway Workers Palace of Culture, one of #Kharkiv’s constructivist architectural gems. pic.twitter.com/KzDQk9fuDW

The news of the Railway Workers Palace of Culture's wrecking was shared on the instant messaging service Telegram by Ukrainian Railways chairman Oleksandr Kamyshin, who is currently monitoring the destruction of railway infrastructure in Ukraine.

In his message, Kamyshin said that Kharkiv mayor Igor Terekhov had shown him photos of the building, "which was engulfed in fire with a total area of ​​more than 4,500 square metres" after the attack.

Kamyshin added that before the war, the building was used by more than 100 children every day.

"Before the war, there were numerous children's clubs in it," he wrote. "Beating the Palace of Culture is a special kind of cynicism." 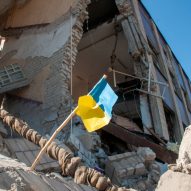 The Railway Workers Palace of Culture is one of many culturally significant buildings to have been damaged by shelling during Russia's invasion of Ukraine.

Since Russian troops crossed the border, the global heritage body UNESCO has reported that dozens of culturally significant buildings have been damaged in Ukraine.

Among the other damaged sites include memorials in the Kyiv region dedicated to those who died in the second world warm and the Popov Manor museum in Zaporizhzhya.

British architect Norman Foster recently announced that he plans to help rebuild the city of Kharkiv, after meeting with the city's mayor earlier this year.

"I undertake to assemble the best minds with the best planning, architectural, design, and engineering skills in the world to bear on the rebirth of the city of Kharkiv," Foster said.

The main photo is by Korolkov Dmitry Yurievich via Wikimedia Commons.