Chilean studio Pezo von Ellrichshausen has completed a pavilion-like artwork in Canberra, Australia, comprising 36 concrete columns and a circular ramp that leads up to a viewpoint.

Pezo von Ellrichshausen's aim for the pavilion is for it to serve as a versatile landmark that can be used and interpreted in different ways.

It forms a key point of interest at the heart of Dairy Road – an evolving commercial and residential neighbourhood in Canberra's East Lake being developed by Molonglo.

"An intentionally ambiguous structure, Less will contribute to the evolving social landscape at Dairy Road by providing a landmark and gathering place," said Pezo von Ellrichshausen.

"Avoiding a deterministic or transactional approach to use and presence, Less invites the evolving community to interact with and occupy its varied spaces as they see fit."

With a square plan, the Less structure is designed by Pezo von Ellrichshausen to be deliberately simple.

Its identical concrete columns are arranged in a regular six-by-six grid, creating a uniform aesthetic on all sides.

"In its monotonous gesture, in its tedious regularity as much as in its lack of direction, bold columns and slender pillars erode any other function than that of framing every other function," explained the studio.

"Many events are allowed in unlabelled places," it continued. 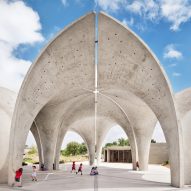 Water pumped up through the pillars trickles down their outer surfaces before pooling at their bases, flowing beneath the structure and dropping down a series of steps.

A ramp beginning at the base of the columns sweeps outwards and around in a loop before rejoining exactly above its start point.

This ramp provides access to a viewing platform suspended among the pillars, from which visitors can look out across the Dairy Road district.

The ground surrounding Less is populated with 6,000 plants of over 50 different species, which will gradually soften the landscape and is intended to provide a reminder of the site's pre-colonial heritage.

The studio hopes that the Less pavilion will invite personal contemplation as visitors stop to listen to the running water and the sound of the wind blowing through the columns.

Pezo von Ellrichshausen's previous projects include a yellow-concrete house in the mountains outside Santiago and a narrow house on Chile's Coliumo Peninsula that juts out towards the Pacific Ocean.

The photography is by Rory Gardiner courtesy of Molonglo.