Pezo Von Ellrichshausen has completed a semi-circular house perched on a hilltop on Chile's Chiloe Island, featuring a slanted shingle-clad roof that extends partially over an internal courtyard.

The studio headed by Mauricio Pezo and Sofia von Ellrichshausen designed Rode House for an elevated plot near the town of Chonchi, from which it faces out towards the inner sea of Chiloe Island.

The building's unusual form resembles a cylinder that is cut in half along its diameter and spliced with an inverted cone to create a sloping roof all the way round.

"The presence of the whole curved case is rather asymmetrical," said the architects. "From one side it stands as a massive and hermetic fortified refuge, from the other it appears as a large pitched roof almost without supporting walls."

Pezo Von Ellrichshausen often utilises strong geometric forms in its architectural work, with past projects including a tower comprising stacked octagonal drums, and a labyrinthine pavilion made from overlapping cylinders.

Beneath Rode House's arcing roof, the internal surfaces are squared off to create two bedroom wings facing each other on opposite sides of a turfed garden.

The position of the bedrooms means one faces north and the other south, creating a different relationship with the sun in each space.

Occupying the area between the two bedroom wings and the garden are a pair of courtyards that are partially covered by the roof as it sweeps around the inner edge of the house.

The combination of the roof and angled walls results in two corner areas that are sheltered from the rain and the strong sea breezes.

The entire building is constructed from local timber, with an array of 45 rigid frames fanning out to form a structure that supports the steep roof.

The walls are clad in vertical timber boards that also extend onto the soffit of the overhanging roof sections, while the roof itself is covered in thin wooden shingles.

The majority of openings face inwards onto the courtyard, although a pair of picture windows set into the walls of each bedroom look out towards the surrounding scenery.

The interior space between the two bedroom wings accommodates a simple lounge and dining space that is connected visually with the landscape and the inner courtyard by large openings on either side.

Timber is also used to line the floors, walls and ceilings inside the house. The architects sought to use the skills of local carpenters in an area renowned for its wooden churches and for boat building.

A pair of circular skylights towards the southern end of the house punctures the curving ceiling and allows daylight to filter into the corners of the living area and bedroom.

All of the necessary storage, kitchen appliances and bathroom facilities are incorporated into units lining the internal edges of the rooms, which helps to maintain a minimal aesthetic. 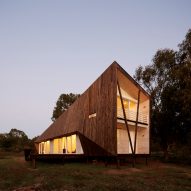