Architecture practices Kohn Pedersen Fox and Heatherwick Studio have revealed the first render of Changi Airport's Terminal 5, which will be the latest addition to the Singapore airport.

Based on the concept of an "airport as a city", the terminal will allow Changi Airport to accommodate an additional 50 million passengers per year, doubling its current capacity.

Heatherwick Studio and Kohn Pedersen Fox (KPF), which won the commission to extend the airport in 2018, are aiming to create a terminal in which people will want to spend time.

"Our intention is to redefine what an airport terminal can be," said Heatherwick Studio founder Thomas Heatherwick.

"Most airports aren't great places to spend time but Changi has always been different."

These curved roofs would also cover the terminal's four connected concourses, while an underground walkway will lead to the final concourse.

"Rather than making a single vast monolith on the outskirts of a city for the exclusive use of travellers, our plan is to create a social space that people living in the city are excited to visit," explained Heatherwick.

"We want to break away from the typical airport experience that you find remorselessly copied around the world and instead offer a human and homely collection of spaces filled with activity and daylight for travellers and Singaporeans alike." 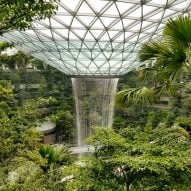 Terminal 5 is set to be built on a 1,080-hectare site to the east of the existing airport. Alongside the terminal will be a business district called the Changi East Urban District, which appears to be housed in a series of greenery-topped buildings.

The building will be connected to the city by rail and a direct connection to the Tanah Merah Ferry Terminal.

Terminal set to be an "iconic building"

"Our design for Terminal 5 is inspired by Singapore's unique blend of nature and city," added KPF design principal Trent Tesch.

"We are conscious of the international significance of this project, and are focused on creating not only an iconic building that is identifiably Changi Airport, but also a memorable and positive experience for travelers and the greater public."

Construction of the terminal is expected to begin in 2024 with the building projected to be operational in the mid-2030s.

Recently Changi Airport was upgraded with the addition of an enclosed greenhouse-like space by Moshe Safdie's architecture studio, which includes the world's tallest indoor waterfall.

Heatherwick Studio has previously designed a plant-covered skyscraper and a university building that resembles 12 giant parsnips in Singapore.

The visuals are courtesy of Changi Airport Group.