Kyiv-based Makhno Studio has paired soft, bumpy textures and intricate ceramic walls inside this all-beige home in Ukraine, which was completed right before the Russian invasion.

Located in Kozyn, a rural town just south of Kyiv, Mureli House is a celebration of summertime and Ukrainian design, with mureli being an old Ukrainian word for apricot.

The home, which was completed just two months before the start of the invasion in February 2022, comprises an open-plan living room and kitchen, three bedrooms with three bathrooms, a guest bathroom, a laundry room and a garage with a terrace.

The clients – a local Ukrainian couple with a large family – requested from the outset that Makhno Studio should work with as many Ukrainian manufacturers and craftsmen as possible to create bespoke products for the house.

"All materials in the home are natural," the studio's founder Serhii Makhno told Dezeen. "The team used almost all Ukrainian brands and worked with several local contractors to minimise the distance and logistics."

The clients wanted a neutral, beige interior across all of the rooms to create a cohesive look. As a result, the house's second floor is finished mostly in wood while the entire ground floor is decorated with beige-coloured plaster.

Makhno Studio emphasised the generous volumes and curved staircase in the home's entrance hallway through a wall of three-dimensional ceramic tiles and a dramatic cluster of pendant lamps made of clay and polystyrene foam.

References to the natural world are integrated throughout the interior. Highlights include a cluster of Makhno-designed pendants in the living room that resemble seed pods and washbasins that appear like hollowed-out boulders.

The only exception to Mureli House's monochrome colour scheme is the main bathroom, which features pink accents including ombre shower doors and scale-shaped concrete tiles that can be tilted away from the wall to double up as hooks for hanging towels and bathrobes.

"Ceramic craftsmanship is an ancient Ukrainian tradition," Makhno explained. "At the end of the 1920s, the ceramic tradition began to be restored in various parts of Ukraine. At Makhno, the tradition is continued today to highlight its uniqueness and naturalistic appeal." 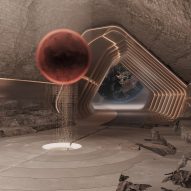 Mureli House currently stands empty since the owners were forced to flee to safer areas in the west of Ukraine following Russia's attempts to storm Kyiv in the early days of the war.

The exact condition of the home is unknown. But Makhno Studio says a Russian military plane and several missiles were shot down over the surrounding area in Kozyn.

Russian troops were forced to retreat from Kyiv at the start of April but left behind a trail of destruction in the city's outskirts and have since carried out a number of airstrikes on the Ukrainian capital.

In total, more than 143 significant cultural sites have been damaged in Ukraine since the start of the war, including the Ivankiv Museum in Kyiv and several second world war memorial monuments in the surrounding region.

Some members of Makhno Studio still remain in relatively safe areas of Ukraine while others are dispersed across Europe and the US, where they are assisting the studio in developing international partnerships and outposts.

The hope is that this will help to popularise Ukrainian design amongst a global audience.

Previous projects from the studio include Makhno's own thatched-roof house in Kozyn and his duplex apartment in Kyiv.

The photography is courtesy of Makhno Studio.