Each structure is covered in a tent-like roof made up of a system of inward curving panels which were fitted with a combined total of 50,000 silver solar panels that can generate almost 7 megawatts of energy.

The upper levels of the campus' two office buildings were designed with a flexible floor under the tent-like canopy supported on slim white columns.

Gathering and social spaces were placed below these large, open plan spaces.

Roofed volumes were placed beside planter partitions while curtains and transparent walls similarly follow a gridded layout to create a "neighbourhood" feel.

"The second floor design has variation in floorplates to give teams a designated 'neighborhood' area that is highly flexible to change with their needs," said Google. 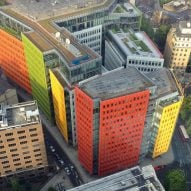 "The idea of the 'office' has been stuck for a long time," added Heatherwick Studio founder Thomas Heatherwick, "Yes, people have done different aesthetic treatments. But there hasn't been a fundamental questioning of the workplace at this scale."

"Our approach has centred on the emotions of individuals and the imaginations of teams and how you create a whole different atmosphere of work."

Each of the campus' inward curving roof and ceiling panels were connected by clerestory windows that bring light into the interior.

Automated window shades monitor light throughout the day and open and close when necessary.

As a result of Bay View's solar panel skin and nearby wind farms, Google explained that the building will be powered by carbon-free energy 90 per cent of the time. Its solar skin will generate around 40 per cent of its energy needs.

According to Google, the campus is expected to meet a LEED-NC v4 Platinum certification while also becoming the biggest facility to achieve the International Living Future Institute LBC Water Petal Certification – a certification that recognises waste- and storm-water reuse.

The structures are surrounded by 17.3 acres of natural landscapes including wetlands, woodlands, and marshlands which form part of a Google initiative to restore natural habitats in California's wider Bay Area.

"The result is a campus where the striking dragonscale solar canopies harvest every photon that hits the buildings; the energy piles store and extract heating and cooling from the ground, and even the naturally beautiful floras are in fact hardworking rootzone gardens that filter and clean the water from the buildings," said BIG founder Bjarke Ingels.

BIG and Heatherwick Studio are two of the world's most in demand architecture studios. They are also collaborating to build Google's London campus at King's Cross, which is set to feature a rooftop garden, running track and swimming pool.

Heatherwick Studio has recently completed a shopping centre in Shanghai covered in 1,000 Trees and is designing a volcano-like performing arts centre in Hainan.

BIG is currently designing a "flood-proof" floating city and the world's "largest neighbourhood" of 3D-printed homes.