Spanish football club Real Madrid has released a video that shows the ongoing remodeling of its Santiago Bernabéu stadium, including the construction of its retractable pitch.

The video shows the exterior of the curved stadium, which is being renovated by designed by Spanish architecture studios L35 and Ribas & Ribas together with German studio GMP Architecten, being fitted with 106-metre-long beams weighing 530 tons.

Inside the 152,000-square-metre stadium, a large pit is being constructed that will hold a new pitch removal and storage system.

Pitch will be stored underground

The retractable pitch will be housed in six underground levels that reach a depth of over 25 metres and feature an underground irrigation system, as well as ultraviolet lighting for the pitch grass.

This design will allow the stadium to also be used for other events, such as baseball and tennis matches, with the grass divided into wide ribbons that are slotted underneath the stadium floor and elevated by hydraulic lifts when needed.

When the renovation is complete Santiago Bernabéu will also be used to hold concerts and will have a capacity of 85,000 visitors, up from its current number of 81,044.

Its wrap-around steel facade has been designed to be lit up so that images and information can be projected on the stadium's exterior, and it will also have a retractable roof.

One of the world's best-known stadiums, the Santiago Bernabéu was originally built in 1947 and designed by architects Manuel Muñoz Monasterio and Luis Alemany Soler. It is currently the second-largest stadium in Spain.

"The new stadium will continue to be the setting that generates the emotions which will leave their mark on Real Madrid's future," Real Madrid president Florentino Pérez said.

"It'll be the best stadium in the world in which to see us once again recognised at the end of the century as the best club of the 21st century," he added. "It'll offer a new stadium, heritage and be a new source of pride for our members and fans".

The stadium renovation was approved in 2016 and is expected to be completed in 2023. 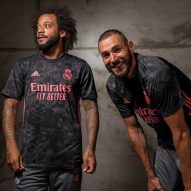 Other stadiums that incorporate retractable playing surfaces include the Tottenham Hotspur Stadium in the UK, Sapporo Dome in Japan, the University of Phoenix Stadium in the USA, the Gelredome in the Netherlands and the Veltins-Arena in Germany.

In other football stadium news, football clubs Inter Milan and AC Milan have announced that the iconic San Siro will be replaced by a stadium designed by architecture studio Populous.

The video is courtesy of Real Madrid.