Chilean studio Hebra Arquitectos has completed a wood-clad, T-shaped home that has stylistic elements from barn architecture and juts out into the landscape in order to provide the best views of the terrain.

Located in Chile's Los Rios region, the Apfel House sits atop a ridge overlooking a forested landscape, with vistas of Ranco Lake and the Andes Mountains.

Hebra Arquitectos – a studio based in Vitacura, near Santiago – designed the single-storey holiday house to embrace the scenic landscape.

The architects took cues from the "volumetry, materiality and horizontality" of old wooden barns in the region.

Roughly T-shaped in plan, the dwelling consists of two conjoined, wood-clad volumes that are topped with a faceted metal roof.

"The house was thought as two horizontal arms that together would find the best possible view of the nature around it," the studio said.

"Therefore, these two volumes were placed perpendicular to each other on the highest point of the hill."

The roof height varies, with the lowest points found on the end.

The facades have a plentiful windows and a series of wide openings and cut-outs that give rise to different atmospheres within the home, the team said.

Inside the main arm, one finds three distinct zones.

One end holds the primary bedroom suite with a small private deck, and the other contains a multipurpose space that is used as a garage, an art workshop and a barbecue area. 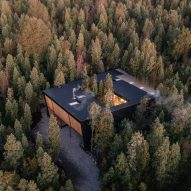 The central portion is an open-plan kitchen, dining area and living room, which are housed under a soaring, vaulted ceiling sheathed in Patagonian oak.

The space is meant to allow for simultaneous activities, including playing games, sitting around the table for a long chat, or cosying up in front of the fireplace.

Along the dining space, glass sliders enable the public area to spill onto an outdoor terrace, which looks north toward Ranco Lake and the valley of Futrono. The other long side of the main arm faces the mountains.

"Dominated by its transversality, it manages to open itself to both sides of the valley," the studio said.

The other volume is a sleeping wing, where one finds four bedrooms, three bathrooms and a sitting area.

"The second arm is perpendicular to the first one, working as a hinge and giving more personality to the access of the house," the team said, noting that the front door sits at the intersection of the two volumes.

On the southern end of the sleeping wing, far from the home's central activities, a sheltered terrace provides a quiet spot to relax and take in the scenery.

Other holiday dwellings in Chile include a "village-like" ocean getaway by Combeau Arquitectura and Andrea Murtagh and an irregularly shaped house on a forested hillside by Triangular.

The photography is by Marcos Zegers.