As the Open House Festival embarks on its 30th year, curators Zoë Cave and Phineas Harper reflect on the value, past and future of the annual architecture event in this exclusive interview.

"The usual ranking, stratifying and hierarchies of what is generally considered worthy of celebration by other architectural programmes melts away."

Launched in 1992, London's Open House Festival is a two-week celebration led by charity Open City that invites the public into buildings and neighbourhoods across the capital's 33 boroughs.

This year marks its 30th edition.

The festival exists primarily to engage everyday people with the built environment, but since it was launched, it has also proved to be an invaluable event for architecture professionals.

"Architects are often attacked in the press"

According to Harper, this is because the festival offers architects an opportunity to engage audiences with their work and in turn, invite more constructive discourse about their projects.

"Architects are often attacked in the press," they told Dezeen.

"The only way to properly understand and appreciate a building is to visit it in person," Harper continued. "Having an event like Open House Festival dedicated to bringing large audiences to see and learn about architecture first-hand is invaluable to the sector."

Since its London launch in 1992, the Open House Festival has been established in a number of other cities around the world, engaging approximately 750,000 people a year. 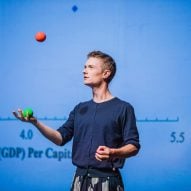 From the organisation's surveys, more than four million visitors have claimed that the event "changed the way they view the city", challenging the notion that architecture and design are not of interest to the public, Harper said.

"For me, this shows that, far from being disinterested, the general public is absolutely fascinated by the city around them and will seize the opportunity to explore and discuss it."

The 30th edition of the festival begins on 8 September. It is set to be its most diverse yet, with events ranging from its traditional building tours to a gig at the Aga Khan Centre by Fumihiko Maki.

According to Cave, this has been made possible by Open House Festival volunteers, who open up the spaces in which they live, work, volunteer or care for free during its two-week run.

"It's a funny thing opening up homes and buildings to people who are strangers, but something keeps these contributors sharing their spaces with others year on year," she said.

"Their energy, and their conviction that, by opening up and sharing their space, we can all learn from each other, is what drives this festival."

This year's festival will also see the launch of London Feeds Itself, a book by food writer Jonathan Nunn that is dedicated to the capital city's food culture.

"For the festival's 30th anniversary we have created our most dynamic mix of events to date including tours of buildings never before opened to the public, music performances in unique and hidden spaces, and the publication of London Feeds Itself," Cave explained.

Among the buildings that the team is expecting to draw large crowds this year include the WilkinsonEyre-designed City Hall and the Southwark Integrated Waste Management Facility, as well as Sarah Wigglesworth's Straw Bale House and CAN's Mountain View House.

Organisers want a "Barbican flat back in the festival"

Yet, despite the scale of this year's event, the curators said there are some "dream buildings" still missing from its list – one of which many visitors may already expect to see.

"My dream building is not novel or some unheard of wonder, in fact, it's unfortunate it even has to be a 'dream' and that the homes in this building don't throw their doors open for the festival year on year," Cave explained.

"Somewhat simply, my dream would be to get a Barbican flat back in the festival."

According to Cave, the event's organisers "very rarely find individuals living in the Barbican who are up for giving tours" of the residential complex and arts centre.

For Harper, the target is the 1970s 50-56 Ferry Street on the Isle of Dogs. Designed by Roy Stout and Patrick Litchfield, the riverside residential complex was largely self-built from reclaimed materials by Michael and Jenny Barraclough.

"It is an extraordinary set of houses on the site of an old paint factory facing the Old Royal Naval College across the Thames and contains many lessons for contemporary designers and commissioners of housing," they explained. 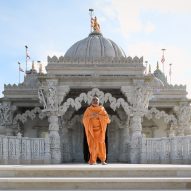 Neasden Temple is built from over 5,000 tonnes of hand-carved stone

Looking ahead, Cave and Harper said that the ambition for the Open House Festival is for it to continue extending its reach internationally, but also closer to home.

"In the UK so far we've only ever run an Open House Festival in London," Cave explained.

"As a Midlandser, this feels like an oversight so my ambition for the decades to come is to launch new Open House Festivals and educational outreach programmes around Britain starting in the West Midlands," she concluded.

Harper, who is also a writer and Dezeen columnist, became director of Open City and Open House London in 2020 after working as deputy director of the Architecture Foundation.

That year, the festival was forced to take some of its programmes online due to the Covid-19 pandemic.

Among its digital initiatives was a collaboration with Dezeen, in which a series of short movies by Stephenson/BishopFilms were published about overlooked and unusual places in the capital including Neasden Temple and Dalston Curve Garden.

Open House Festival takes place in London from 8 September to 21 September 2022. See Dezeen Events Guide for an up-to-date list of architecture and design events taking place around the world.

The photography is courtesy of Phineas Harper.