Mexican architecture studio Cimet Arquitectos has remodelled and reinforced an 18-storey-tall structure in Mexico City after it was damaged by a series of earthquakes.

Cimet Arquitectos, which renovated the exterior and interiors while correcting the tower's structural issues, described the project as "an icon of urban recovery and renewal not seen on such a scale before in Mexico".

The 1970s Glorieta Cibeles Tower, which was designed by architecture studio Grupo Danhos, had to be extensively renovated following earthquakes in 1985 and 2017 that rendered it uninhabitable.

The earthquakes left the tower with a substantail tilt when the tower detached from the foundation, and much of the interiors were left in a state of disrepair.

Because of new zoning laws, such a structure could not be built today, so Cimet Arquitectos was brought on restore the tower.

"The building represented a great challenge to a prevailing paradigm within architecture and its relationship with the environment through urban recovery: rethinking pre-existences as a means for a more conscious architectural work," Cimet Arquitectos partner Yoram Cimet told Dezeen.

In order to carry out the renovation, the studio needed first to correct the tilt of the tower. This was done by excavating under the tower to disconnect some of the pilings — the steel rods that anchor the skyscraper — and the ballast that created the uneven tilt.

The tower was then reconnected to the foundation with 30 per cent more pilings.

In order to ensure that the tower remained resistant to earthquakes, the studio added steel and concrete reinforcements above ground as well as 72 viscous structural dampers.

While much of the concrete structure above ground was retained, the circulation core of the building was relocated to open up of floorplates and allow for expanded elevators to be added.

Through these interventions, the total tower was raised 10 metres from its original height.

Cimet Arquitectos completely reclad the building, which was previously clad in a mix of concrete panels and dark glazing.

"The tower was designed as a sculptural inhabitable obelisk," said the studio.

"The facade is timeless, incorporating highly efficient double glazing," it continued. "Its reflectiveness gives the tower an illusory quality."

The lobby was expanded into a double-height space with reflective ceilings and marble finishes on the walls, while structural joints and a winding staircase were painted gold. 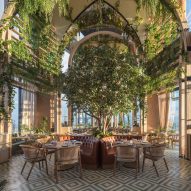 "This project was more about giving the former structure a new life while keeping its former office use and adding all the desired elements of a new building rather than a historical perspective of preservation," said Cimet.

The rooftop, which is crowned by glass cladding, was turned into a garden space with a glass pavilion in the middle.

Other projects that seek to restore old tall buildings include SOM's recent plans to refurbish Lever House in New York City, which the same firm designed in the 1950s.

The photography is by Luis Gallardo and Jaime Navarro.