Mexican architecture studio Void Studio has completed a small residential development in Tulum called Cuatro Cielos that features internal courtyards and exterior corridors that are designed to promote encounters among the residents.

With a blank facade facing a residential street, the four-unit development was designed around internal courtyards.

"With a discreet facade, the architects devised a development that would open inwards, that would make a view of its own space, opening to its own forms, textures, colours, lights, shadows and vegetation," said Void Studio, an office based in Chihuahua and led by architects Fernanda Rodríguez and Joel Martínez.

Two units are on the ground floor and two are upstairs, each of which has its own pool or small water feature. Exterior corridors link the interiors of the development, and each of the units has its own exterior space.

"It was important to make sure they knew they were in Tulum, that they lived the jungle, the heat, the ambient humidity and, of course, the skies," said architect Fernanda Rodriguez of Void Studio.

"The apartments are intertwined and let the presence of the others be perceived in places like the crossing passageways, bridges, and the matched angles," the studio added.

The units offer a mix of two and three-bedroom apartments. Some of the bedrooms are built as standalone structures, meaning that residents must pass through an exterior courtyard to access their quarters.

Each unit has a unique layout, which the architects say helps the occupants identify with their living space.

The two units on the ground floor are laid out on a single level, while the two upstairs units have an internal staircase, bringing the total height of the complex to three storeys.

While the ground-floor units enjoy larger courtyards and pools, the upper-level apartments have rooftop terraces that overlook the surrounding jungle.

Void Studio selected a palette based on Tulum's local context.

The walls and floors of the building are covered with Chukum, a type of local stucco that is made by mixing cement with the pulverised bark of the indigenous Chukum tree. 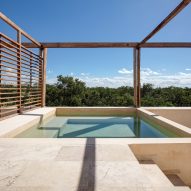 This process makes the stucco waterproof and gives it a pinkish hue.

Locally sourced limestone forms accent walls and was also used for the gravel found in the project's internal landscaping.

"Aesthetically, the natural character of those materials pay tribute to the beauty of Tulum’s jungles and beaches," said Void Studio.

"It exploits the impact of sunlight on its surfaces, turning out in colors, textures and entire atmospheres that change according to the hour of the day and the season of the year," the studio added.

The interiors feature a restrained palette, with warm accents such as tropical woods and woven homewares.

Other recent projects in Tulum include a white cement residence that CO-LAB Design Office designed to protect several Areca trees on its site, and a pink apartment building that local architects Reyes Rios + Larrain designed around a central courtyard and communal pool.

The photography is by Zaickz Moz.