German artist Thomas Demand has teamed up with Caruso St John Architects to create his first building – a pavilion at the Kvadrat headquarters in Denmark that was designed to look like it is made out of paper.

The Triple Folly is made up of three volumes, featuring elements that resemble a paper plate, a sheet of notepaper and a paper hat.

In this way, the building playfully references the architectural models that Demand has spent his career producing and photographing as art.

"What was important to me was that it follows the logic of paper," Demand said during a tour of the building.

"In my experience as an artist, I have the best ideas when I can work away with things in my hands," he added.

"I thought that would be a good guideline for the whole thing."

The Triple Folly is located in Ebeltoft, Denmark, at the headquarters of textile brand Kvadrat.

The building is set to be used as a venue for hospitality events and conferences. However, this was not prescribed from the outset as Kvadrat CEO Anders Byriel gave Demand free rein to design whatever he wanted.

"It was a very unique experience," Demand said. "I tried to design every element in the building and was not stopped by Kvadrat."

Their previous collaborations include Nagelhaus, an artwork that was set to be built in Zurich in 2009 before funding was cut, and which was later exhibited at the Venice Architecture Biennale. 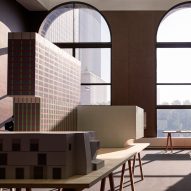 For The Triple Folly pavilion, the role of studio founders Adam Caruso and Peter St John was to make Demand's paper vision buildable.

They chose to use fibreglass to transform the three paper elements from Demand's architectural model into large-scale architectural elements, which each represent a different function within the pavilion.

The paper plate was translated into the roof canopy of a cylindrical entrance lobby, which also houses a kitchen and informal dining space. Meanwhile, the folded piece of legal paper becomes a gable roof that is propped up by slender columns above a glazed meeting space.

The purple-coloured third volume, which is shaped like an American soda jerk hat, provides a space for performance. Its size was dictated by a textile artwork by German artist Rosemarie Trockel, which is installed inside.

Each of these elements has the feel of a paper model, much like the building itself.

Among the few things Demand didn't design are the chairs, which are the work of the late Swiss architect Max Bill.

The Triple Folly joins a series of artworks on display at Kvadrat's headquarters, including Roman Signer's House sculpture and a series of mirror "pools" in the landscape by Olafur Eliasson.

Demand described the pavilion as "the first and probably the last building" he will ever produce. "I think it's a piece of sculpture as much as it's a piece of architecture," he concluded.

The photography is by Nic Tenwiggenhorn.