Located in Marfa, a small art and ranching community between the Chihuahuan Desert and the Davis Mountains, the building was inspired by the early architecture of the region with rooms arranged around a courtyard.

"These homes are often stone, brick, or adobe, one room wide and U-shaped — opening to an inward veranda and surrounding the court that opens to the east, shielding against the seasonally persistent north-western winds."

The studio used three million pounds of earth to create the rammed earth walls, which were chosen to reflect a connection to the landscape.

This material was used for the structure as well as for the finishes.

"Rammed earth is a simple material that reinforces the connections to the land and the landscape," said Harris. "It is a labor of love to commit to the use of earth when building, and the craft of the construction is evident throughout."

"Rammed earth is the unifying element, the same inside as it is out; everything about the material and the construction is made plain and evident."

In addition to the two-foot-thick walls of rammed earth, which help to keep the home cool during the summer and warm over the winter, the arrangement of the home was designed in response to the climate.

"There is a deliberate quality of spareness that matches the qualities of the land," said Harris.

The ranch house is divided into eight different structures connected by a covered walkway that is lined with columns made from recycled oil field pipes.

The rooms act as a wall around the courtyard, forming an arrangement that the studio describes as both walled off and open.

"The court connects people to a more introverted landscape while protecting them from the wind and sun," said Harris.

"As a counterpoint, most all the surrounding rooms open to both the interior and exterior landscape and are positioned to accept the cooling breeze reaching out to the exterior foreground and distant horizon."

The courtyard, which features a central fountain filled with collected rainwater, is shaded by local mesquite trees. 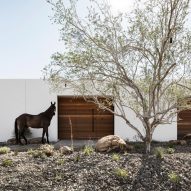 The Ranch Mine creates O-asis home in the Arizona desert

An open-plan living area with floor-to-ceiling glass windows and a large black fireplace offers views of the surrounding desert.

The living spaces extend through sliding doors made from weathering steel to covered terraces furnished for dining and relaxation.

Next to the living area is a large black dining table, which leads to an additional nook on the side of the space which acts as a smaller dining area.

Additional rooms extend from the other sides of the courtyard, including four bedrooms, bathrooms and a space that doubles as a bar and a library.

At the end of a boardwalk that extends from the main courtyard is a pool that was converted by the studio from an old water tank, the only existing structure on the site.

Founded in 1984, Lake Flato Architects has completed various other homes in Texas, including a tall waterfront lake retreat and an Austin home with a boardwalk leading to a lake.