London-based toothbrush company Suri has created Sustainable Sonic Toothbrush, an electric toothbrush with an aluminium body and brush heads made from plant-based materials that can be recycled after use.

Suri founders Mark Rushmore and Gyve Safavi designed the Sustainable Sonic Toothbrush after learning that nearly every plastic toothbrush ever owned still exists in the world. They believe it could replace plastic toothbrushes – four billion of which they say are disposed of each year around the world.

"Over the last few decades, electric brushes haven't meaningfully changed; only novelty features, such as Bluetooth-enabled apps, have emerged on the market under the guise of innovation," Rushmore told Dezeen.

"While most are bulky composites of plastic that can't be recycled because they're welded shut, it's no surprise that every year over four billion brushes – including electric ones – are thrown away and end up either in landfill or in our oceans," he added.

"We wanted to create a brush that champions design, performance and sustainability without compromise."

The Sustainable Sonic Toothbrush heads, which come with medium to soft bristles are made from corn starch and castor oil.

Traditional toothbrushes usually have bristles made from nylon, which end up as landfill waste or marine waste for decades.

By contrast, Suri claims that they are 100 per cent recyclable. Users can send their used brush heads back to the brand in the post in compostable paper bags provided by the company.

By using a pre-paid compostable return service, Suri hopes to make the process of changing heads as easy as possible and discourage its customers from switching back to disposable brushes out of convenience.

The company recommends changing the brush head every three to four months as you would traditional electronic toothbrush heads.

Alternatively, the brush heads can be recycled at home by removing the bristles and disposing of them in a home waste bin where the brand says they will eventually break down in a couple of years.

According to the toothbrush manual, the metal clips that connect the bristles to the head and the inner core of the head can also be recycled at home in the same way as aluminium foil. The remaining cornstarch shell can be sent to a local industrial composter. 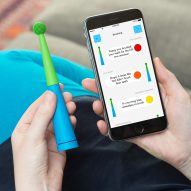 Meanwhile, the aluminium body can be sent back to Suri to be repaired or have its rechargeable Li-ion batteries replaced once they run out. The batteries are designed to last for up to 30 days without being charged.

"Once a customer's battery dies, they can send back the brush to us to replace the battery or complete any other repairs, if necessary," Safavi explained.

"Whilst we're refurbishing the brush, we will send that customer a replacement brush so they can still brush their teeth."

Despite Suri's sustainability claims, the brand sources the materials and manufactures its toothbrushes in China. As a result, the product's carbon footprint is much larger than it would be if the product was manufactured locally.

"All components are sourced in China but we found that we could reduce our scope three emissions by not shipping parts to the region to assemble and then ship on once again," Rushmore said.

"We are looking to make production more local, but this was the most optimal way to launch with sustainability in mind."

Cutting down on virgin plastic in toiletries is one way that designers are trying to make their products more sustainable.

Images are courtesy of Suri.