The Jordan for Hay toothbrush is available in pink, navy, green or white, while its bristles are coloured in two halves so the upper part provides an accent.

"I wanted to introduce more modern colours and design a toothbrush that is intuitively functional with beautiful simple aesthetics using only one material," said Engesvik. "I think it will look good in any bathroom."

Produced as part of Hay's collaboration with Norwegian dental brand Jordan, Engesvik's toothbrush is kept as pared back as possible to follow Scandinavia's tradition for minimal design. 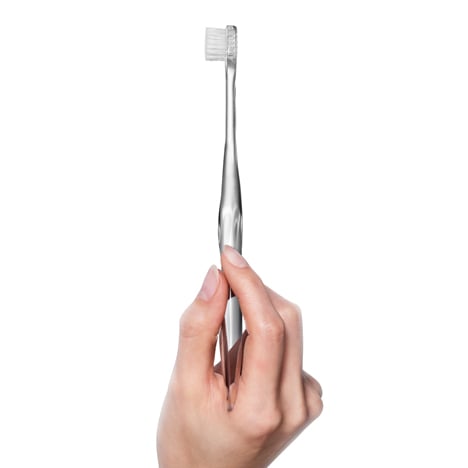 Misoka toothbrush cleans your teeth with nanotech ions instead of toothpaste

"I wanted to create a toothbrush that is true to its origins," he said. "For me Scandinavian design is about clean, simple forms that we trust."

The collection was launched with a new selected edition of colours during this year's Milan design week, including a navy brush with a lighter blue top and a pink version that has a white tip.

The white toothbrush is available with either a red or a green top, both of which contrast the grey bottom half. A yellow version features a darker-toned top, while the green is a lighter tone.

Hay debuted the toothbrush in an installation at La Pelota during Milan's design week, which ran from 12 to 17 April 2016.

During the event, British designer Sebastian Wrong also launched his new lighting brand in partnership with the company.

The humble toothbrush has gone through a variety of iterations of the years. Recent examples include Bruzzoni Global's pared-back electric toothbrush with metallic accents and Kosho Ueshim's nanotech toothbrush that cleans your teeth without toothpaste.