Fluff Stuff is a textile filling created from plants cultivated on rewetted peatlands in Finland, which has been designed by students at Aalto University and was on display as part of Helsinki Design Week.

Co-founded by engineer Lukas Schuck and designer Tea Auramo, who are currently studying master's degrees at Helsinki's Aalto University, Fluff Stuff is a range of prototype soft homeware and clothing.

These products include various colourful cushions and duvets as well as jackets, bags and a hooded hat that are stuffed with cellulose fibres.

The pieces are filled with typha latifolia, a type of plant commonly known as broadleaf cattail, which is defined by its long cigar-shaped seed heads and is typically found in Finnish peatlands – a type of wetland.

Each product is stuffed with plant fibres instead of traditional, carbon-intensive down filling. According to the Fluff Stuff team, cattail absorbs 66 per cent less water than down and dries twice as fast.

"Typha fibres are naturally coated by a wax layer, making them highly hydrophobic," they explained.

Currently, the plants are harvested from rewetted peatlands in Finland using the team's first prototype device – a handheld machine that abstracts the cattails through suction.

"Drained peatlands account for 50 to 60 per cent of agricultural emissions in Finland," said the Fluff Stuff team, explaining that the project aims to restore rewetted peatlands while also providing a more sustainable solution to creating textile filling. 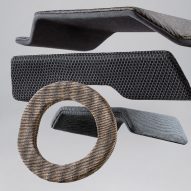 Designer Auramo explained that the team is currently using textiles it has sourced for the project, but in the future, it plans to make its own textiles in which to use the filling, as Fluff Stuff has plans to become a commercial range.

"We chose colours [for the textiles] that would fit with our own dyed colours, so you can see beige and blues and red tones so that they will fit later when we do more prototypes," the designer told Dezeen.

She also explained that they chose green as a colour for some of the products, due to its "fit in more modern homes".

Other recent similar student projects include fabrics created from plants grown in seawater and dissolvable ramen packaging that turns into edible sauce.

The photography is by Aalto University, Mikko Raskinen and Anna Berg.

Helsinki Design Week took place from 1 to 11 September 2022 in Helsinki, Finland. See Dezeen Events Guide for an up-to-date list of architecture and design events taking place around the world.