Their textile, called Fibers Unsorted, is a technical fabric made from mixed-fibre clothing that would otherwise have gone to landfill. Instead, it is processed into a product that is durable and high-quality enough to be used in the automotive industry, among others.

Even though recycled fabrics have become more commonplace, textiles are difficult to recycle and the bulk of such waste goes into landfill.

"The challenge that Fibers Unsorted set was to develop a quality yarn out of the big waste streams of textile that are still today only down-cycled into a poor insulation material or get burned or end up in a landfill," Envisions director Sanne Schuurman told Dezeen.

"We need to keep this resource as long as possible in its cycle and extend its lifetime to create valuable products out of it."

The difficulty in recycling textiles comes because they contain many types of fibres, materials, colours and quality levels, all jumbled together and "impossible to sort industrially", according to Envisions.

The Fibers Unsorted project started with development and engineering company Imat-Uve, which began researching methods of deconstructing mixed textiles into usable fibres in 2013, setting out to spin them into yarns that could compete with their predecessors in terms of quality.

The textiles they used are mixed on a fibre level – for instance, blends with cotton, polyester and elastin.

Working with several manufacturing partners and experts, Imat-Uve developed a method that involved treating the fibres carefully to keep them as long as possible with the aim of ending up with a comparable fibre length to virgin materials such as cotton.

In its process, almost all garments can be used, with only around 15 per cent of fibres being filtered out, usually because they are too short to make a quality yarn.

A few fibres are not suitable for recycling at all, such as carbon fibre, which oxidises and causes problems in the machinery. 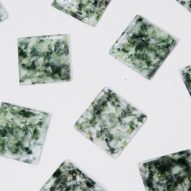 Imat-Uve's technique also has the benefit of requiring no chemical processes, so it is more sustainable than other similar initiatives.

Envisions came aboard the project to turn the yarn into attractive textiles and present tangible applications.

The yarn it received was grey and unrefined, but the designers developed it into a series of textiles with various textures, patterns and colour palettes.

To accomplish this task they added in some coloured recycled polyester yarn, but they limited it to 20 per cent of the textile and always applied Imat-Uve's yarn for the weft.

Envisions also created an installation using the textiles that was shown at Dutch Design Week in 2021 and might make further appearances in 2022.

The installation shows the Fibers Unsorted fabrics applied to hanging abstract objects that in their shape and placement resemble a disassembled vehicle.

"Although hinting at multiple applications and usages, the abstract installation leaves plenty of room for imagination and possible applications in industries beyond automotive," said Envisions.

The design studio said it chose to focus on the automotive industry because its materials must meet the highest industrial standards, but the textile could also be applied in furniture design, upholstery and flooring.

Envisions is a Dutch studio that won the Dezeen Award for emerging designer of the year in 2018. It is a collective founded by Design Academy Eindhoven graduates, bringing together a team of more than 20 multidisciplinary creatives.

Its past projects have included a paving strategy for the city of Eindhoven and works exploring ways of cutting into, printing on and transforming wood.