London-based Studio Egret West has designed Mayfield Park in Manchester, which is said to be the city's first new central park in more than 100 years.

The 6.5-acre park was created by the public-private Mayfield Partnership and opened to the public last week. It has been built as part of a neighbourhood containing 1,500 homes, commercial spaces, shops and leisure facilities created by developer U+I.

Located next to Piccadilly train station, Mayfield Park is located on a formerly derelict area of Manchester that was once the centre of the British textiles industry during the Industrial Revolution.

"In Victorian times it was a city within a city, powering Manchester's role in the Industrial Revolution. As we look to the future it feels entirely appropriate that Mayfield will set a new blueprint for the creation of beautiful, progressive, sustainable neighbourhoods." 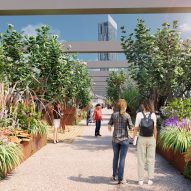 The River Medlock, one of Manchester's three major rivers, was uncovered as part of the development after more than 50 years contained under a concrete covering.

It now runs through the park and attracts wildlife including kingfishers, brown trout, ducks and geese that visitors can enjoy while walking along the riverside path.

A children's play area, which was formed around six chimney-shaped towers, features crawl tunnels, slides and rope bridges as well as wheelchair-accessible equipment.

"This park marks the beginning of a long-term transformation for this part of Manchester – starting with the green space as a statement of intent about what we want to achieve as part of this highly sustainable, low-carbon programme of regeneration," said leader of Manchester City Council Bev Craig.

The surrounding historic buildings are being redeveloped as part of the wider plans including the vast Mayfield Depot, which was recently transformed into a cultural venue by Studio Egret West.

The park's development was funded by £23m of investment from the UK government's Getting Building Fund.

Other examples of public squares and spaces include Exchange Square, a public square above the tracks of Liverpool Street Station by DSDHA, the Xuhui Runway Park by Sasaki and an undulating public square in Copenhagen that contains parking for 2,000 bikes by COBE.

The photography is by Jarell Goh and U+I.