Architecture studio Tonkin Liu has completed a biomimetic tower containing flues for a low-carbon energy centre in Manchester, England, along with a sculptural wall made from organically-shaped tiles.

Tonkin Liu's architectural interventions form part of the city's Civic Quarter Heat Network and Energy Centre, which provides low-carbon energy to a network of key sites across the district.

Called The Tower of Light and the Wall of Energy, the building aims to transform its site next to Manchester Central station into a landmark that celebrates the innovative technologies being employed to produce and distribute cleaner energy.

The 40-metre-tall Tower of Light encloses flues that funnel hot air away from a combined heat and power engine and two gas boilers. It was designed to provide a visible expression of the project's environmental agenda and is illuminated like a beacon at night.

The tower is the latest, and to date the largest, biomimetic structure to be developed based on research conducted by Tonkin Liu and engineering firm Arup into lightweight building methods based on geometries found in nature.

The Shell Lace Structure project, which began in 2009, previously informed the design of a sculptural tower installed in Hull, and was used to develop a prototypal windpipe stent for use after tracheal transplant surgery.

The Tower of Light was constructed using flat steel sheets with a thickness of just six or eight millimetres, which were laser-cut and welded together to create strong and rigid curved surfaces.

"Learning from geometries in nature, the tower's form is its strength," said Tonkin Liu. "The super-light, super-thin single-surface structure uses the least material to achieve the most."

The tower's oval form is corrugated to increase the surface area and create a surface with built-in rigidity. The latticed steel structure allows the tower to be built with less material than an equivalent smooth cylinder.

Perforations in the steel sheets increase in size towards the top of the tower, reflecting the decreasing dead load and allowing more wind to pass through the structure.

Reflectors incorporated inside the tower direct sunlight into its chambers throughout the day, while LED lights aimed at the same reflectors produce animated lighting sequences at night. 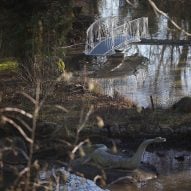 The tower and the new energy centre are enclosed by a 63-metre-long street facade formed of glazed ceramic tiles.

The high-gloss finish on the tiles reflects light and movement in the urban environment throughout the day and is animated with programmed lighting at night.

"The tessellated interlocking lozenge tile pattern evokes the dynamic energy of earth's movements, as seen in patterns left in the sand by ocean waves," the architects explained.

A total of 1,373 tiles were produced in 31 different shapes to allow the undulating surface to change across its height.

A long ribbon window incorporated into the wall enables passers-by to look inside and see the inner workings of the energy centre.

As a whole, the project aims to celebrate the pioneering technologies used within the energy centre, creating a 21st-century landmark within a district known for its engineering heritage.

Tonkin Liu is headed by architects Anna Liu and Mike Tonkin, who found the multidisciplinary office in 2002. The studio's output often uses technical innovations to replicate the optimised design solutions found in nature.

The London-based office previously designed a biomimicry-informed swing bridge for a park in the UK capital, as well as a residential extension with a concave roof that curves around a reflecting pool.

The photography is by David Valinsky unless stated.