Architecture studio Proctor & Shaw has refurbished and extended a Victorian townhouse in south London, adding a series of glazed volumes to the rear facade that allow daylight to reach deep into the plan.

The brief for the home, named Sky Lantern House, involved preserving the character of the existing building while making its interior more suitable for modern living.

Proctor & Shaw was asked maximise height and light within the reconfigured interior, as well as improving the connection with the rear garden.

Its interventions were focused predominantly on the rear elevation, while the existing south-facing front facade was preserved for heritage reasons.

"Early studies showed that massing could be added to the rear without impeding on neighbouring rights to light," said Proctor & Shaw.

"A series of carefully sculpted volumes were developed both within and across the back of the house that could enhance ceiling heights internally and filter light into the deep plan."

An existing staircase at the centre of Sky Lantern House was replaced with a stair arranged around a three-storey triangular void that allows daylight to reach each level.

The new stair has a visually lightweight folded-steel structure wrapped in planks of Douglas fir, with a minimal steel balustrade ensuring light can filter through.

The stacked glass volumes added to the rear of the house reference the irregular rhythm of the traditional dormers that are a feature of the Victorian terrace.

An underused bedroom on the first floor was converted into a home office that overlooks the living areas below. A void connecting the two levels is topped with a translucent glass box that maximises natural light and glows like a lantern at night.

"Rather than infilling this new room with a floor, a double-height space is instead brought to the heart of a grand family living space below, around which other rooms connect, enjoy views and borrow light," said Proctor & Shaw.

Externally, the Sky Lantern House extension is predominantly clad with vertical U-shaped glass panels. These function as clerestory windows at first-floor level and wrap around the solid walls on the ground floor to form a rain screen.

Slender steel columns that support the lantern-like box are hidden to create the illusion that it is floating. 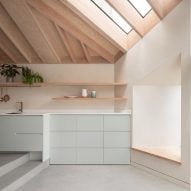 At the front of the Sky Lantern House, the entrance opens into a hallway with a door to the refurbished lounge. Both the hallway and living area lead to the ground floor kitchen and dining room.

The kitchen and dining area connects with the garden through two sets of sliding glass doors, the largest of which are 3.7 metres tall. Its open-plan interior features integrated joinery and foldaway workstations for the client's children, allowing for flexibility of use while maintaining a minimal aesthetic.

On the first floor, the main bedroom was upgraded with walk-in wardrobes and an en-suite bathroom overlooking the extension's sedum-planted roofs.

John Proctor and Mike Shaw founded their south London studio Proctor & Shaw in 2014. It specialises in residential architecture, ranging in scale from extensions and refurbishments to large multi-unit developments.

The studio's previous projects include an award-winning extension featuring an oak soffit and a large skylight, and an angular extension that replaced a leaky conservatory at the rear of an Edwardian terrace.

The photography is by Ståle Eriksen.