Mexico City interiors studio Chloé Mason Gray has renovated a house in Colonia Condesa, embracing its lack of natural light to create a space for a bachelor.

Built in the mid-20th century with a pared-back art deco style, the two-storey house is currently rented long-term by an American tech worker, who hired studio founder Gray to improve the interiors with the owners' permission.

Combining antique Mexican design pieces with those by contemporary Mexican artists and designers, the aim was to create a home that felt rooted in its place.

"It is a place where playfulness and restraint in design happily coexist, and a source of relaxation and inner peace for the inhabitant," said Gray.

The 154-square-metre property is shaded by large trees on the avenue outside, preventing much natural light from entering some of the rooms.

Embracing the dark and moody atmosphere, the designer chose colours and textures that would make the spaces feel "masculine, rich, and interesting".

"I wanted to create a space that was functional, comfortable, masculine and dynamic," Gray said. "It had to feel both a bit unexpected, and approachable. I strove to reflect quiet luxury and a sense of richness through the colors and materials."

Dark green walls and ceiling envelop the upper-floor library, where the fabric of a Bastiano two-seater sofa by Tobia Scarpa and plants add variations on the hue.

Meanwhile, the primary bedroom was covered in brown textured plasterwork, complemented by a leather headboard, and green linen bedding and curtains.

In other spaces, a variety of off-white plaster finishes sit in contrast to dark furniture – much of which is made from warm-toned red cedar.

"I think red cedar pairs beautifully with the green tones in the house," said Gray. "In Mexican spaces, you tend to see a lot of either very pale wood, tzalam or walnut, and I liked the idea of using a medium red-toned wood instead."

One of the most dramatic interventions involved coating the original sculptural staircase in indigo-pigmented concrete. 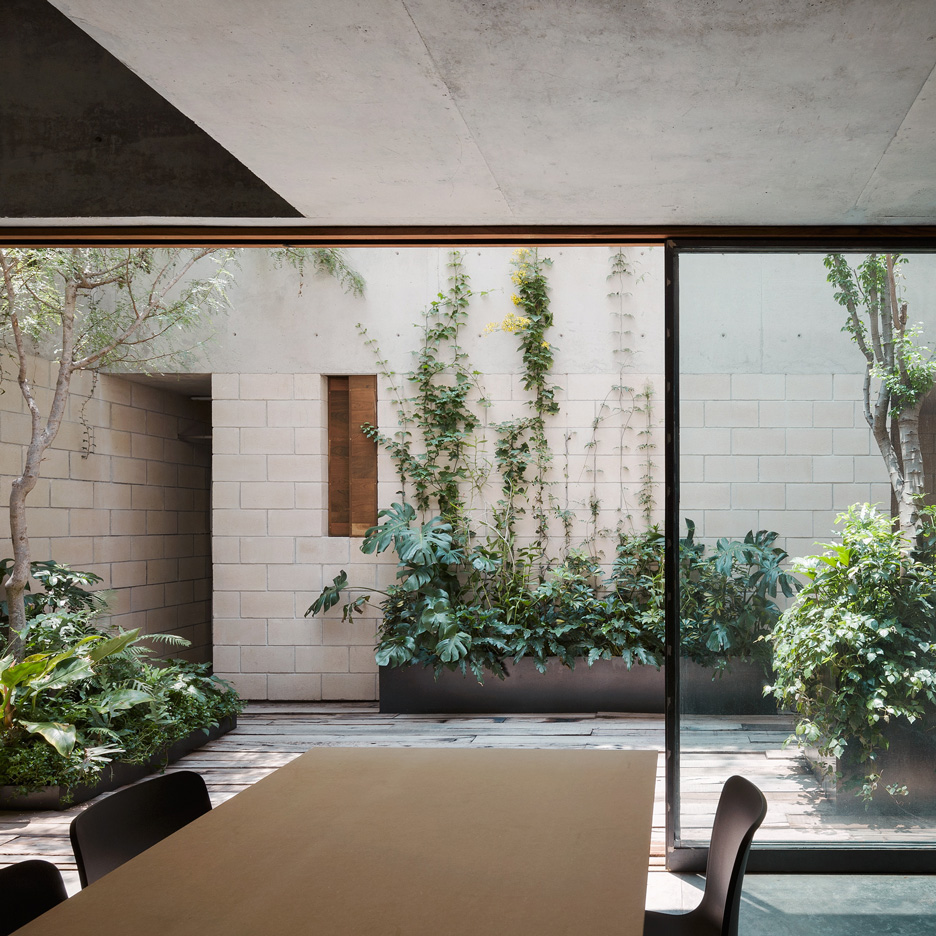 A custom dining table was built from a quartzite slab, which is flecked and veined with colours found across the home.

Upstairs, an office is outfitted with a restored vintage desk by Clara Porset for DM Nacional, and a Brno chair by Mies van der Rohe and Lilly Reich.

European oak floors were laid throughout the interior, while furniture by Roberto Michelsen was placed on the roof deck.

A variety of artwork and smaller accessories bring the design together, but adding these touches turned out to be the designer's biggest challenge.

"It's a very oddly-shaped house," said Gray. "I don't think there is a single straight wall in the whole house."

"Every wall and room is at an angle, so at times positioning furniture and art in a way that felt natural and correct was challenging," she added.

Mexico City's historic Colonia Condesa is a popular place to live for locals and long-term visitors alike, thanks in part to its rich architecture.

Examples of projects completed in the central neighbourhood include four new homes built behind a historic facade and an apartment block covered in small wooden squares.

The photography is by Fabian Martinez.