Australian studios Noxon Giffen and McGregor Coxall have created a series of remote shelters on the Grampians Peaks Trail in Victoria, featuring a material palette of metal, stone and wood that complements the rugged terrain.

The structures sit at 10 campsites along the 160-kilometre-long hiking trail, which traverses the Grampians National Park, or Gariwerd, from Mount Zero in the north to the town of Dunkeld in the south.

Melbourne studio Noxon Giffen and landscape architecture firm McGregor Coxall developed designs that respond to the specific contexts, histories and conditions of the given sites.

The project is shortlisted in the small building category at Dezeen Awards 2022, alongside Richard Rogers' final building and the Chestnut House by João Mendes Ribeiro.

The brief for the Grampian Peaks Trail shelters stated that they should connect with the landscape in a meaningful way and enhance the hiking experience along the route. Alongside them, a series of camping huts and amenities pods have also been installed at some sites.

Parks Victoria, which manages the trail, worked closely with the land's aboriginal owners to define clear guidelines and boundaries for landform, ecology, spatial typology and cultural immersion at each site.

The shelters provide basic amenities including tent platforms, toilets and communal areas, offering walkers comfort and refuge for a night or two.

Each one also offers protection from the elements while enhancing visitors' connection to the Gariwerd through their placement in the landscape and materials that directly reference their surroundings.

"To celebrate and incorporate the landscape into the design, a considered selection of natural materials was used for the shelters, responding to the specific nature, colours and textures of each individual campsite," the project team said.

The architects chose materials that can be found within the local settings of each campsite, or that echo the natural surroundings, including oxidised steel, sandstone, bushfire-charred or weathered timber.

As a consequence, they form a family whilst each displaying a unique character.

Noxon Giffen and McGregor Coxall also designed the communal shelters for ease of construction in their remote locations and to minimise ongoing maintenance.

A modular system was adopted that allowed for the prefabrication of some elements, helping to reduce costs and make construction more straightforward in areas with limited helicopter access. 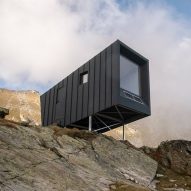 Each building features a central open area called a breezeway, which connects large decks on either side. The covered area provides space for food preparation at one end and communal dining at the other.

Some of the huts are clad with vertical timber battens that wrap around a weatherproof plastic skin. Large openings in the cladding are carefully positioned to frame views of the Gariwerd.

"The timber battens provide shadow and camouflage," explained the studios.

"[Meanwhile] translucent walls offer an abundance of natural light during the day and a soft glow that references the canvas tents scattered amongst the landscape at night."

All of the buildings are designed to touch the ground lightly and to minimise their impact on the environment, thereby protecting the Gariwerd's biodiverse landscape and microclimate.

Other hiking shelters featured on Dezeen include a honeycomb-like structure on a Norwegian mountain and a tiny aluminium-clad hut that cantilevers over the edge of Mount Kanin on the Slovenian-Italian border.

The photography is by Shannon McGrath unless stated otherwise.