Kyiv architecture studio Bogdanova Bureau has vowed to make its office "even more beautiful than before" after it was damaged in a Russian missile attack.

Staff at Bogdanova Bureau arrived at the office on Monday to find the windows blasted into the room and debris and broken glass scattered across the floor.

Russian forces had fired a barrage of missiles into the Ukrainian capital and other cities early that morning, killing 19 people and injuring many more.

None of Bogdanova Bureau's employees were harmed, though some of their possessions were destroyed, the studio told Dezeen. By Tuesday, the team had cleaned up the office and returned to work in the studio.

"In some time we will repair all that is broken and make our place even more beautiful than before," said studio spokesperson Nadia Sheikina. "As designers, we know how to do it."

"As well, we are going to rebuild all the destroyed cities and villages, all the schools, homes and ambulatories that were ruined in Ukraine," she continued. "We already had started working on it."

"We were scared on February 24 when the war started, now we are not," she added. "We know that the mean enemy wants to invade our land and appropriate our culture, but it will never happen."

The office is in the heart of Kyiv next to Shevchenko Park, and is surrounded by a university, libraries, museums, and a cultural centre, as well as apartments and office buildings.

A missile struck the middle of the park close to a children's playground, with the blast wave destroying windows across the building housing the studio's office.

The bombardment of central Kyiv was part of a series of attacks launched in retaliation after a key bridge linking Russia to the annexed region of Crimea was heavily damaged by an explosion.

In April, Bogdanova Bureau spoke to Dezeen for a piece about how Ukrainian design and architecture studios were dealing with the war. 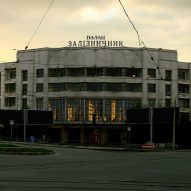 At the time, its founder Olga Bogdanova urged international clients to trust Ukrainian studios to deliver despite the turmoil of the conflict.

"But after eight months of the war, we feel that some of you got used to the war. Please do not be! It is understandable, no one can be stressed for such a long time and everyone deserves to experience their own life and focus on some normal things around them," she continued.

"We ask you not to get used to war and pay your precise attention to Ukrainian designers, architects, and artists. Please raise your voice and stand with Ukraine. It can make things different!"

The photography is by Yulia Bevzenko unless otherwise stated.