The installation, which was informed by European grottos, palaces and villas, was created for French fashion house Dior's Spring Summer 2023 womenswear show.

Placed in the centre of a circular space, the installation was constructed using sheets of corrugated cardboard that were fixed to a wooden frame.

Jospin glued together hundreds of sheets of cardboard and used handheld electric sanders to carve into the stacked volumes, creating detailed reliefs that echoed the curving forms of eroded rock found in grottoes and caves.

The artist works exclusively with cardboard, combining sculpture and architecture to create perspective environments and spatial settings by carving into stacked sheets of the material.

For the Dior set, Jospin aimed to mimic the sculptural and ornate forms found in the Buttes Chaumont grotto in Paris, as well as the decorative architecture in Villa Borromeo Visconti Litta in Lombardy and the frescoes in the Palazzina Cinese in Palermo.

At the show, seating was organised in formal rows around the amorphous cardboard structure at the centre of the room. The structure was dimly lit from within, emphasising the rolling topography and material quality of Jospin's work.

Dior's womenswear creative director Maria Grazia Chiuri had approached Jospin, who had previously made an installation for the brand's Autumn Winter 2022 couture show, with a proposal to create the architectural grottos after visiting the artist's 2021 Carte blanche show in Paris. 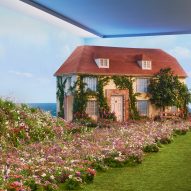 "For the show, [Maria Grazia Chiuri] thus gave carte blanche to Eva Jospin – with whom she had already collaborated on the Dior Autumn Winter 2021-2022 haute couture show – to imagine a baroque grotto made of cardboard, a key element for the artist, an essential object of her research," said Dior.

"Grottos and caves are architecture carved into rock, changing over time, characterized by the progression of nature, the metamorphosis of encrusted shells."

The brand described the set as "gallery, forest, cave: the artist's universe explores interiority, mystery, with those energies that constitute a fundamental component of femininity."

"A three-dimensional work that then takes on a two-dimensional form on panels and canvases adorned with arches, ruins and vegetation-covered walls."

This season saw a number of brands creating architectural designs for their shows. During the men's Spring Summer 2023 collections, Villa Eugénie installed two replica villas and a garden filled with 19,000 flowers for its runway show.

Photography is by Adrien Dirand.